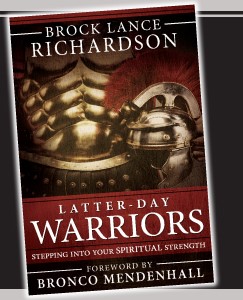 When I first saw the synopsis for Latter-day Warriors, I knew I wanted it for my sons. When I received it in the mail, I was excited to have my oldest son, Casey, read it. In the book, Brock Richardson interviews multiple football players and their wives. Casey loved reading each of their stories, his favorite being Matt Allen’s.

He was refreshed by the spiritual content of the book (Scriptures and church magazines were often quoted), and the stories each football player told about their missions, football, and how the Spirit worked in their lives.

It was clear that the purpose of the book was to help us see the Latter-day warrior inside of us – the spiritual fire everyone has – and how to understand it.

Some important lessons Casey learned from the book are:

He saw all of the football players as role models because they put their missions and families as top priorities over their dreams of football.

Because of their examples, Casey wants to choose the right even if it is hard, or doesn’t seem like the most desirable option. He also has an even more firm resolve to go on a mission.

Casey gives this book 5 stars because the messages are consistent, and the football players set a good example for youth and adults alike. He liked everything about it.

You can purchase Latter-Day Warriors here.

*I received a copy of this book in exchange for an honest review.

Discover the spiritual warrior in you! Based on the belief that every soul has a spiritual warrior within, author Brock Lance Richardson interviews ten men he met through BYU football. Each reveals what it takes to become physically and spiritually strong, while their wives describe what it means to be a “warrior” for young women. Perfect for youth and young adults, this entertaining and spiritually uplifting read will teach you how to build spiritual stamina and to use your inner warrior for good.

Brock Lance Richardson grew up as the oldest of seven children in Idaho Falls, Idaho. He served a mission for the Church of Jesus Christ of Latter-day Saints in Montevideo, Uruguay. While serving his mission, his father passed away with complications related to Crohn’s disease. The desire to honor his father’s memory has continually driven Brock to search for the spiritual warrior within himself. Returning from the mission, he played football at Snow College and later at BYU. He met his sweetheart Stephanie at Snow College and they married in 2009. They since have had two children. He is currently a Seminary teacher and is part of a non-profit organization called “Marked Generation,” organizing events and seminars for children that have lost parents. He loves the youth and believes in their tremendous potential.