From Weak to Strong

Making Life a Bliss Complete > Faith > From Weak to Strong 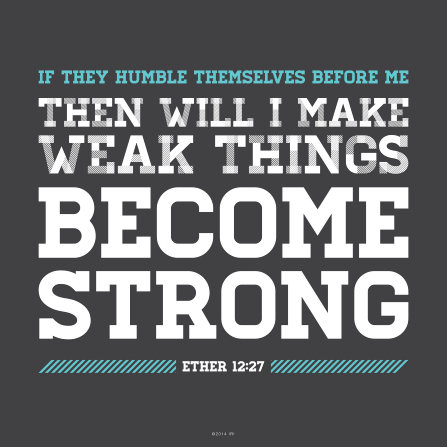 My husband, Jad, has been going through an IT certification program since September. He has taken four certification exams so far. In preparation for each, he has attended all of his classes, done all the labs and pretests, and spent hours and hours studying. He has also refrained from ever studying on the Sabbath Day and has made sure to spend time with his family as often as possible.

He passed the first three exams with relief, and some disbelief. He knew in each case that his prayers, and the prayers of others, had been answered, and that he received divine assistance in passing each one.

The fourth exam, the one he took three days ago, he dreaded for weeks. It would be the hardest and longest exam of the entire program, with hundreds and hundreds of pages of studying material. While preparing, Jad went through the same diligent process, studying even more to make the likelihood of him passing the exam higher.

At the time he took the exam, nobody in his class had passed it yet. Jad knew the odds weren’t in his favor, but had faith that once again, his prayers would be heard because of his diligence.

After a grueling 2.5 hours, Jad found out that he had not passed the exam. I wasn’t that surprised when he called me and told me, but I knew he was disappointed.

When he got home that night, he was really down. He said that he just couldn’t shake the feelings of discouragement and failure.

I tried to comfort him by saying that it was the hardest exam and that all of his other classmates at that point had also failed.

I half-jokingly said that if he had passed it, everyone would have hated him. Then more seriously, I gently explained that now he could have empathy for how his classmates were feeling – that perhaps he could lift their spirits by listening to and relating to their feelings of defeat and frustration.

I also told Jad that if he had passed the exam, he might not take his studies as seriously, but instead think that if he just prayed enough, he would always pass, whether properly prepared or not. Jad agreed with me, as he had not felt totally prepared for that exam. We both knew this drawback was a way to keep Jad humble.

Jad was at least grateful, through all this, that he had gotten a detailed summary of his strengths and weaknesses relating to the answers he had provided on the exam. He felt glad to know that as he would soon prepare to retake the exam, he would know exactly what to focus on. Then once he passed it, he would really know the material and be able to apply it to the workplace.

As we went to bed that night, I could tell Jad still felt pained, unable to shake the thought that he had worked so hard and had nothing to show for it.

The next morning, after he said his morning prayers, Jad came to me with a little smile on his face, and said that as he was praying, a scripture from The Book of Mormon had come to his mind. As he tried to quote it, I knew exactly which one it was:

He didn’t say much after that, but I knew that that scripture verse had really comforted him.

Jad has never felt that  he was the smartest person in his class. He struggles with the IT language, and has to work extra hard, and study extra long hours. One of his instructors recently told him that he is logged into their system to study and do labs more often than any of his classmates.

This scripture is such a gift to Jad, to know that if he continues to be humble and have faith, that he will become strong in his field.

He will pass his fourth exam, and he will continue to progress in knowledge and experience.

Jad has recently been blessed with an internship with Orange County. We know that because he patiently and prayerfully waited for the right opportunity to arise, that the right one did come along at the right time.

I am proud of my husband and all his hard work and dedication. It isn’t easy to have him gone so much, and I know it isn’t easy for him either. He doesn’t have time to do the things he used to, but we know that he was inspired to go into the IT profession.

Regardless of the setbacks and disappointments he has in his journey to a new and better career, he will be blessed if he does his very best.