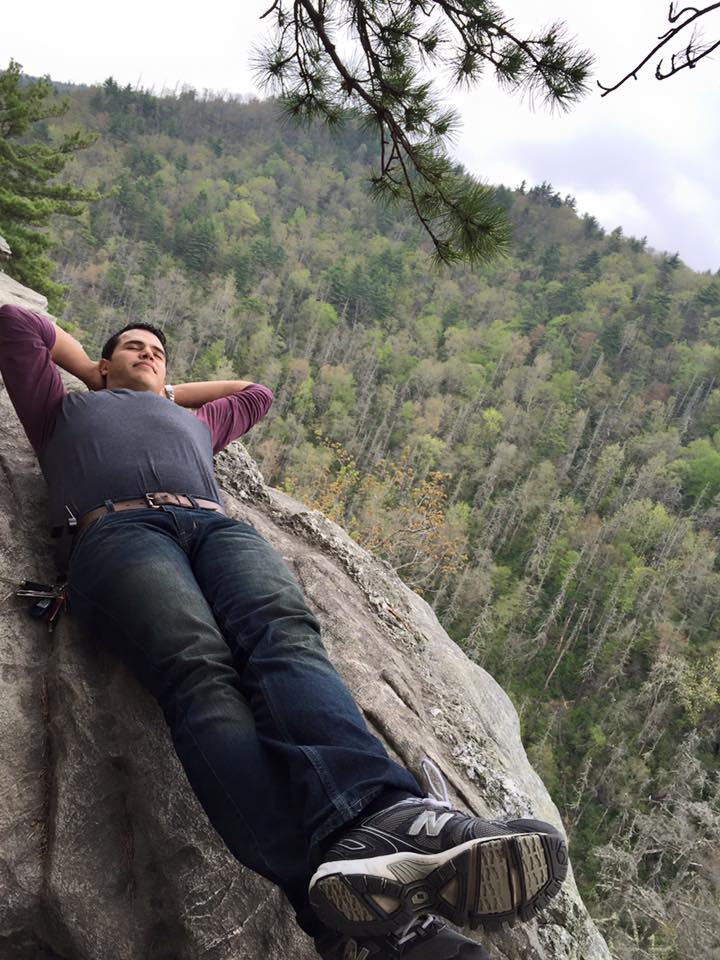 Today is my husband’s, Jad Al-Bjaly’s, 34th birthday. He will probably tell you he is only 33 or 32. That is a joke that never gets old in our house, at least to him, haha.

Since it is his birthday, and since I have never done so before, I want to write a post that will honor him. I want the reader to get to know Jad from the inside out. I want my husband to know how wonderful I think he is, but most of all, I want him to know that he is wonderful. Sometimes I don’t think he realizes it, even when people tell him so. Jad is from Amman, Jordan, so his first language is Arabic. When he came to the United States for the first time, he could barely speak any English. But, he immersed himself in it and learned little by little. He has continued to perfect his grammar since I met him in 2009. I hope everyone will think in their minds how difficult it is to learn another language. My husband has a strong accent and his spelling isn’t the best, but I admire him so much because he is bi-lingual. He knows two extremely difficult languages. It always makes me smile when he meets someone else on the phone or in person who speaks Arabic. They both seem to light up and become instant friends as they engage in the language of their birth.

My husband has one older brother, Tawfeeq. His father left his family when he was only seven, so he was mostly raised by his mother, Salma, with the help of his grandmother and aunts and uncles. His family was very poor. I am humbled every time he tells me about how often they bathed (or didn’t), how they had to conserve water, how they didn’t have air conditioning, how a huge amount of people lived in one small house with one bathroom and mattresses strewn all over the floor to sleep on. Sometimes Jad would even sleep under the stars on the balcony. I think having grown up with such hardship helped refine Jad into a self-reliant, giving, thankful, person who is determined to be a good father, husband, brother and son. Jad loves the heat and the outdoors. Rock climbing, zip lining, running, playing soccer, camping (to name a few) are all loves of his. Unfortunately for him, I don’t like doing any of that, but he never complains. He has sons he will, and has experienced, these things with. Most people that know Jad even a little, know he is a wonderful cook. Interestingly, though, he didn’t used to be. The first time he tried to make spaghetti, he didn’t realize he had to boil the noodles. He just had the dry noodles in a pot and kept adding sauce, hoping the noodles would cook. We always laugh at that story. To think that he learned how to cook mostly over the phone from his dear mother, Salma, is just amazing! Our family and friends simply love eating Jad’s cooking. He can whip anything up. He chops vegetables faster than anyone I know, and he knows just how to season anything from meat to pasta. He is so comfortable in the kitchen, and uses his talents to bless others’ lives. And he even cleans up his messes, which can be many. He can’t bake but that is okay. We make that my job, and joke at his expense about his baking capabilities (don’t worry, he laughs too). He is not musically talented per se (we will call that my talent), but he still proudly sings in church meetings and with our children. He is wonderful at Arabic dancing, and finds so much joy in teaching our sons to do the same. Some of his favorite music is from the Mormon Tabernacle Choir. He is constantly listening to beautiful music while he cleans or does projects around the house.

Jad is a very hard worker. When he gets started on a project, he just keeps going for hours on end, never tiring. From landscaping, to gardening, to painting, to organizing, to building, he puts his all into it. This work ethic continues into his job and education. He is someone who wants to continue to progress throughout his life. He is currently studying for his CCNA certification. It is extremely difficult. He studies two nights a week on average (after having worked a full day at his job), and has a plan to achieve this certification by the Fall. He wants to support our family so that we have everything we need. He never stops learning. At work, his colleagues and superiors can count on him to find an answer when there isn’t one, or to volunteer for something that nobody else has ever attempted to do, like organize the server room (have you ever seen a server room? It can be scary). He is also a very spiritual man. I am amazed at his knowledge of the gospel of Christ even after just eight years of being a member of The Church of Jesus Christ of Latter-day Saints (I was impressed when I first met him before his 1-year mark). Today is his baptism anniversary. He is a wonderful spiritual leader in our home. Together, we make sure we study scriptures as a family, as a couple and individually daily. We pray together,  do our family home evenings each week, share spiritual messages on social media often, do service as often as we can, go to the temple every month we can, and strive to set a righteous example for our children in word and in deed. My kids have the best dad in the world. Casey is not Jad’s biological son, but he has raised him from the age of four. He loves Casey as his own, and teaches him how to be a good person. No matter how tired Jad is after work, he will play with our kids until they get tired (which is usually never). His smile and laughter are just as precious as those of our children. He is such a fun dad in every way, and he takes his responsibility as a father incredibly seriously. He plays with them, teaches them, disciplines them, and most importantly, loves them. He gives as many kisses, provides as many snuggles, and says “I love you” as much as I do. The boys have no doubt that their daddy cherishes them. And soon, he will be able to raise his very own little girl. He is more excited about it than even I know. Jad is also a wonderful husband. Sometimes I don’t see the big picture, and that is usually when we have quarreled in some way. Jad and I are both stubborn and sensitive. That doesn’t always work when there are feelings hurt or buttons pushed. But, I can’t imagine spending my eternity with anyone else. All the reasons above should be enough reasons, but he is so good to me. When he comes home and not everything is done, I usually am apologetic or annoyed at myself. But he always tells me that it’s okay, and gives me a kiss. He knows that I work hard every day, and he immediately offers to help me finish all that needs to be done. If I need a nap or need to get out of the house, he says, “Go ahead, honey.” He never accuses me of laziness or of making excuses. He knows that I am not that way, and he is completely understanding. He trusts me completely with our finances and with planning our weeks and months. He trusts my judgment on things. If he has concerns, he will express them, but ultimately trusts me because he knows that I make my decisions thoughtfully and prayerfully. He supports me in my endeavors, from starting (or quitting) a business to participating in a musical. We make big decisions together as a couple, and he never tries to be in charge of me or tell me what to do. He sees me as an equal partner, and we work together with God to do what is best for our family. He also does nice things for me and makes me feel special. He has made so many beautiful things for me with his hands, things I will cherish forever. He genuinely loves me, appreciates me, and thinks I am beautiful. We have also endured some scary trials and witnessed beautiful miracles together that have increased our faith. I didn’t have to think very hard to write all this, and as I wrote from my heart, tears have streamed down my face the whole time. I am not creative like my husband, but I can write the words of my heart. He would never talk about himself the way I have just spoken about him. He is too humble and doesn’t see himself as more than ordinary. But, to me, he is extraordinary and the perfect father and husband to our family. I love you, Jad, and I hope this birthday is your most precious yet.