Pioneer: One that goes before, showing others the way to follow.

Making Life a Bliss Complete > All Things LDS > Pioneer: One that goes before, showing others the way to follow. 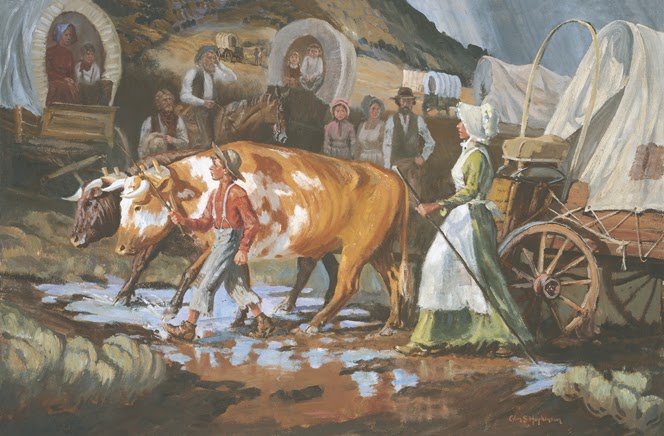 Every year on July 24, members of The Church of Jesus Christ of Latter-day Saints (Mormons) celebrate Pioneer Day, the anniversary of the day that the first Mormon pioneers arrived in the Salt Lake Valley in 1847. It is a day to honor and remember the faith, courage, sacrifice, and perseverance of the early members of the church.
The early Saints were such powerful examples of putting God first and following His will no matter what the circumstances. They endured more hardships than most could ever imagine, fearing for their lives, being driven from place to place, grieving over the martyrdom of their beloved prophet, and traveling hundreds of miles by foot (some with only handcarts in the bitter cold of winter), to finally find a resting place where they could worship the Lord, Jesus Christ, in peace.
A pioneer is one that goes before, showing others the way to follow. Because of their commitment, unity, faith and selflessness, the pioneers paved a way for millions to find the joy and truth they had received.
There is so much to be learned from these Mormon pioneers, and they actually still exist today. They don’t deal with the same hardships, but Mormons from all over the world strive to follow Jesus Christ as valiantly as the faithful men, women and children who crossed the plains. I love this video narrated by Elder Dallin H. Oaks, an apostle in The Church of Jesus Christ of Latter-day Saints. He speaks of the idea of modern-day Mormon pioneers.
One definition of a modern Mormon pioneer is one who is the first member of his/her family to join the LDS church.
My husband, Jad, is one of these pioneers. He grew up in Jordan with a very large family, all who affiliated
themselves with the teachings and traditions of the same Christian religion.
Throughout his childhood, Jad had many questions. He would look up at the stars and wonder where he came from and what the purpose of life was.
When he was about 9 or 10, he asked a priest these questions. He was quickly rebuked saying that he should not ask such questions as they would make him crazy.
When Jad sadly learned that there were no answers to his questions, he slowly slipped away from his religion and
God. He finally denounced religion all together when he stopped attending his Christian school at age 15.
In his early adult years, after graduating from college in Jordan, he moved to the United States for a business opportunity with his uncle. A few years later, his friend told him of another opportunity in North Carolina.
One night as he walked through Wal-Mart to shop for his store, he saw two young women and walked up to them. They were kind to him and invited him to a party. He accepted and was excited to attend.
When Jad arrived at the party, he noticed it was much different than he expected. It was a family party, celebrating with family members who would soon move away. He stayed, though, and accepted an invitation to visit this family’s church, called The Church of Jesus Christ of Latter-day Saints.
That Sunday he met many new, smiling faces. He felt good as he listened to the children of the congregation put on a musical presentation. He left church with an invitation to help someone in the congregation who needed a ramp built for his home.
This was Jad’s first experience with the Mormon Church, but not the last. Over the course of the next nine months he would attend church every Sunday. He would have the missionaries in his home on a weekly basis, and feed them each time.
He was full of questions, and sometimes skepticism. He asked for a long time that the missionaries only answer his questions through Bible verses. They were always able to do so.
After one lesson with the missionaries, they challenged Jad to not drink the next time he went out socially. He took the challenge, and he was surprised at how different everyone acted when intoxicated. He didn’t like it. So, even though for years Jad had drank nearly every night, he never did again after that experience.
Not everything came so easily for Jad, though. He found many Mormon beliefs to be strange, but he kept listening
and studying and spending time with the members and missionaries.
Though he resisted with his brain, his heart could not sever him from the church. Even when members of his family presented him with anti-Mormon materials to read and view, he did not stop investigating.
Through the months he investigated the church, Jad got many answers to questions. The teachings of The Church of Jesus Christ of Latter-day Saints made sense. It all made sense, but he was nervous it was too good to be true.
One night, he prayed to Heavenly Father and told Him that if He answered Jad’s prayers on behalf of his friend, himself and his uncle, all with different needs, that he would know the church was true, and that he would join.
The next morning, after talking to these two individuals that he had prayed about the night before, he joyfully
realized that his prayers had indeed been answered. Jad knew that he would then accept the invitation to be baptized into The Church of Jesus Christ of Latter-day Saints. He was baptized on his birthday, July 22, 2008. Soon he was called upon to be a ward missionary in his congregation, and then the ward mission leader.
Jad had a testimony, and felt happy in his new faith. The questions he had had his whole life were answered. He still had more questions, though, and kept asking.
Over time, Jad gained a stronger testimony of things that weren’t as clear when he got baptized. After the first General Conference he viewed, he knew that there was a living prophet. When he paid an honest tithe, he gained a testimony of tithing.
Jad’s change of lifestyle, faith, and heart did not come without its struggles. Several members of his family ridiculed
him for changing his lifestyle and no longer following the traditions he had always known. His own brother told him he would never talk to him again, though has since changed that stance.
For the last six years, however, Jad has remained true to his baptismal covenants. He has tried his best to stand as a witness of God at all times and in all things and in all places (Mosiah 18:9).
He has had numerous conversations with members of his family about the faith that he loves so dearly. He tries to set a good example for them, and help them find the full truth of the gospel of Jesus Christ. He has not given up, and will never do so. The gospel means that much to him.
Jad and I truly believe that he was meant to live in the United States so that he could find the restored gospel of Jesus Christ. He never meant to live here, but instead wanted to be a pilot in Jordan. But, he is now one of very few Arabic members of the church. We believe that he has a great opportunity to help spread forth the kingdom of God
to those of his heritage.
Jad Al-Bjaly is a modern-day pioneer.
Many members of our church have a long line of members in their family. However, all Mormons can be pioneers as
they stand for what is right even when it isn’t popular, when they live their lives in service to God and to their fellow men, and when they share the light they have with others.
Last Sunday, our worship services began with talks about the growth of the church in the Hillsborough and Mebane areas over the last several decades. Members of the church that grew up in these areas prayed and hoped for many years for an LDS chapel to be built closer to them so they could better serve and worship the Lord. That day has come.
At the end of the meeting, our stake president gave a heartfelt and beautiful dedicatory prayer. The greatest desire emanated from the prayer was that the church members would work diligently with the missionaries, and dedicate their efforts to lovingly and boldly sharing their testimonies and spiritual knowledge with others. By so doing, our
new church building can be filled with new faces to love and nourish with the good word of God.
Mormons see beauty and truth in all religions, with respect for them all. We believe that there is much truth in all Christian religions about Jesus Christ and His gospel. The difference is that we believe that our church is the same church that Jesus established on the earth, with the same doctrines, the same priesthood authority, with the same focus on living the commandments as He presented them himself. We believe that God still speaks to a prophet today, and that we don’t have to be confused in today’s increasingly wicked world. We believe in loving and serving others every day of our lives, and we want with all of our hearts to share this joy and fulfillment that we enjoy every day.
Every single member of the church who shares this light with others, in hopes that they join with us, is also a modern-day pioneer.
I am a modern-day pioneer. My blog is dedicated to sharing my testimony, my faith, my hope with each of you. I want every person in this world to have the blessings of eternal families. I want everyone to know that God loves them and knows them. I want everyone to know what my husband wondered – where they came from and what this life is for.
Another apostle of The Church of Jesus Christ of Latter-day Saints, Elder Neil L. Andersen, narrated a very spiritual video about pioneers, old and new, and about their love for their Savior, Jesus Christ. Please watch it. I promise it
will touch your heart, as it does mine each time I watch it.
President Gordon B. Hinckley, our beloved prophet from 1995-2008, said, “We honor best those who have gone before when we serve well in the cause of truth.”
Elder Oaks expounded on this by saying, “That cause of truth is the cause of our Lord and Savior, Jesus Christ, whose servants they were, and whose servants we should strive to be.”
I strive every day of my life to be the Lord’s servant. As the song “True to the Faith” says,
True to the faith that our parents have cherished,
True to the truth for which martyrs have perished,
To God’s command, Soul, heart, and hand,
Faithful and true we will ever stand.
Faithful and true I will ever stand – soul, heart and hand. I am a modern-day pioneer. Thank you to all of you who are and will someday become a modern-day Mormon pioneer. May God bless you in your zeal and devotion to the cause of truth.