One Roadtrip, Four Ways to Use the Potty

Making Life a Bliss Complete > Memories/Stories > One Roadtrip, Four Ways to Use the Potty 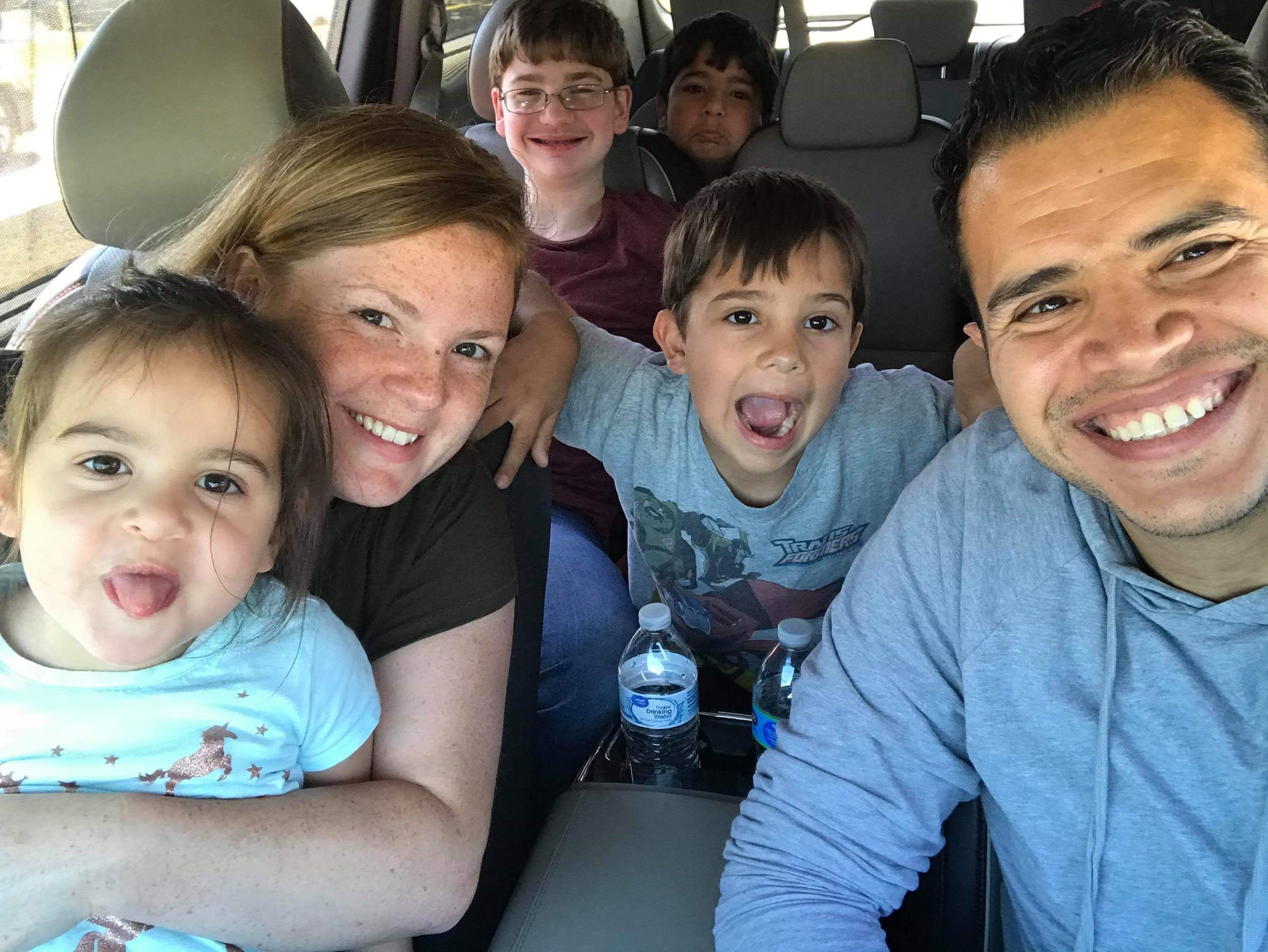 Since we have been at home so much due to the restrictions surrounding COVID-19, I thought it would be an awesome idea for us to take the kids on a little road trip to Troutman, NC to visit Zootastic.

We know a couple families whose kids recently called it the best place ever, so we knew we had to go!

So, yesterday, we left the house mid-morning to make the 1 hour 40 minute drive there. It was around lunchtime when we got to the area, so we dropped by Randy’s Barbeque to get lunch first.

Jad ordered the food from the car and we waited for him to go get it. The food was pretty good, though the order wasn’t all the way right. The cups of drink were gigantic, though. We were surprised, but sure grateful for that later. (Stay tuned.)

My brother-in-law and his family decided to go to Zootastic too, after our last minute invitation. They ended up “arriving” before us since we had stopped for lunch. We knew to expect some traffic as we got there, since we had seen a little when we passed it to go get lunch, but as we approached the entrance to the park, we stopped well down the road due to ridiculous amounts of traffic.

We knew it would be a while, so Jad turned on Bedtime Stories on his phone (thank you, Verizon, and thank you, Disney Plus!). We laughed hysterically as we waited in the super long line (thank you, Adam Sandler!).

We finally turned left onto the road the park was on, but we were still in bumper to bumper traffic. At that exact moment, Rigel cried out that he really had to go to the bathroom.

Well, we weren’t near any businesses. We just had a grassy area on our right, and I was not about to have him pee out there when there were cars everywhere. I explained that to him, but it wasn’t registering.

I looked at one of the gigantic styrofoam cups and said that he should pee in that. Rigel did not like that idea at all. He got panicky and begged for a place to go to the bathroom. He was freaking out about it. While he was doing that, I, being a most compassionate, sympathetic mother, was laughing so hard I had tears streaming down my face. Rigel was nothing but cries of agony, even after realizing the horrible truth that he would have to PEE IN A CUP. He then screamed out about not being able to unbutton his pants, and after we reminded him he didn’t need to, he yelled at Eve not to look. More panic came, but then only relief flooded over him as he finally let it go… and peed in his cup.

In the 10 years Jad and I have been married, we have NEVER had to have anyone pee in a cup in the car. So, when Eve then said she had to go potty, the joke was on me. Jad told me to handle it.

What??? What if she pees on me? And on herself? And on the car? Okay, I can handle this.

I pulled down her pants, told her to bend her knees and squat as much as possible. I held another gigantic cup under her, praying I had positioned it right and I wouldn’t drop it. I was awkwardly leaning down, holding part of her weight on me, and holding the cup. She kept saying that it was coming, but it wasn’t coming. But, then, finally, when I felt hope slipping away and resigned myself to being peed on while the cup cracked in my tired fingers, it finally did come out, and she peed perfectly into the cup. I didn’t drop it, and the day was saved.

Jad wanted to toss the pee outside, but I said that was gross and tacky, so we didn’t for a while. I heard they did it when I took Kamren to the porta potty a little while later, when we finally turned into the park. Stinkers.

We thought we were in the home stretch when we turned into Zootastic’s parking lot, but yeah, we could haven’t been more wrong! We were just starting the eternal, snail-paced zigzag of cars. The line was so long, we finished watching Bedtime Stories, and watched most of Tangled before we finally got to the part where we paid, and that’s with pausing the movies every time someone went to the bathroom (which was a lot). I was grateful for the porta potties, which I never thought I’d say, as well as for the extra baby wipes I had packed!

I found I was grateful for a lot during those hours of sitting in the car. The cell phone movies, cups and porta potties were just the beginning. I was grateful that the kids could unbuckle their seatbelts and move around due to the slow pace. I was grateful that people had their windows down and we could wave to each other and smile at the cute kids. I was grateful for Facebook messenger where we could see my brother-in-law’s family and talk to them. I was so grateful when we were able to wave to their car about three zig zags away. It’s so weird to say it felt amazing to just wave to them, but it did.

The sweetest experience of waiting in line was Eve being able to sit in her Daddy’s lap and help him “drive” the van. He taught her about turning the wheel, and it was adorable.

We were all exhausted by the time we paid to enter Zootastic, but also excited. A little ways in, Jad was able to get out and open the trunk so Casey and Rigel could sit in the back. Eve also was in the back occasionally (she kept moving around). It was a chance for my two oldest to bond.

When compared to how long we waited in the car before actually seeing the animals, the Zootastic experience was quite short, even with the cars going slowly.

But, we did see some beautiful animals, and some of us got to pet and try to feed them.

At one point, Kamren really had to go to the bathroom (again), so Jad took him to the portapotty that was right by where our van was at the moment. I didn’t feel right about it, suggesting he also pee in a cup (hey, we were experts by now), but he said they’d be able to catch up.

Well, the cars started moving faster, and when Jad and Kamren came out, they were going really slow and not catching up. Then Casey and Rigel told me they weren’t moving at all, but were talking to an employee.

Meanwhile, we kept going further and further away. I couldn’t turn around or pull over. Then, we noticed someone in a tractor drive up to them. Kamren and Jad got to ride in it across the bison field back to the safety of the van! I think they loved it. They may have had an initial scolding from one of the Zootastic workers, but it was an experience they wouldn’t have had otherwise!

When we finally were done with the drive through zoo, we got to park for the first time in hours to go into the general store. It was well past closing time, like almost 7pm, but we felt so happy to just get out and stretch our legs! And we were grateful they kept the store open. We didn’t get anything (except a gigantic $.99 pen for Kamren), but the kids loved looking around.

And then I was grateful for a cute picture of our kids outside of it!

None of us was super excited to get back in the car and go home, since we had been in the car since 10:30ish that morning, but we did. We also had to get food. We weren’t thrilled about going out to eat twice in one day, but at least we have been saving a lot of money on gas and entertainment lately!

I researched the closest Papa John’s, found one 15 minutes away in Mocksville, placed an online order quickly, and it was ready by the time we dropped by Sheetz to get drinks and then arrived to pick it up. I am grateful for modern technology that made the food ordering so easy! And I’m grateful Sheetz has gum, because Eve was having a huge tantrum about wanting gum right before we got there (she hadn’t had her “beauty rest”).

We didn’t watch any more movies on the way home. We just ate, listened to music, and relaxed the best we could. And we made it home, only having to stop once for Kamren to go to the bathroom. So, that day, people went to the bathroom one of four ways – in a cup, in a porta potty, in a real bathroom (thank goodness for one of those by the general store), and the side of the road. What a potty-tastic adventure!

Not long before getting home, we sang a hymn and read scriptures on my phone. I was grateful once again for cell phones.

Are you tired reading this? Imagine how we felt!

But, at least we can remember this day of trying to have fun during COVID-19 with fondness and hilarity.

And maybe we’ll just go back to hiking until this mess is over! Hiking is easy and we can get out of the car. 😀