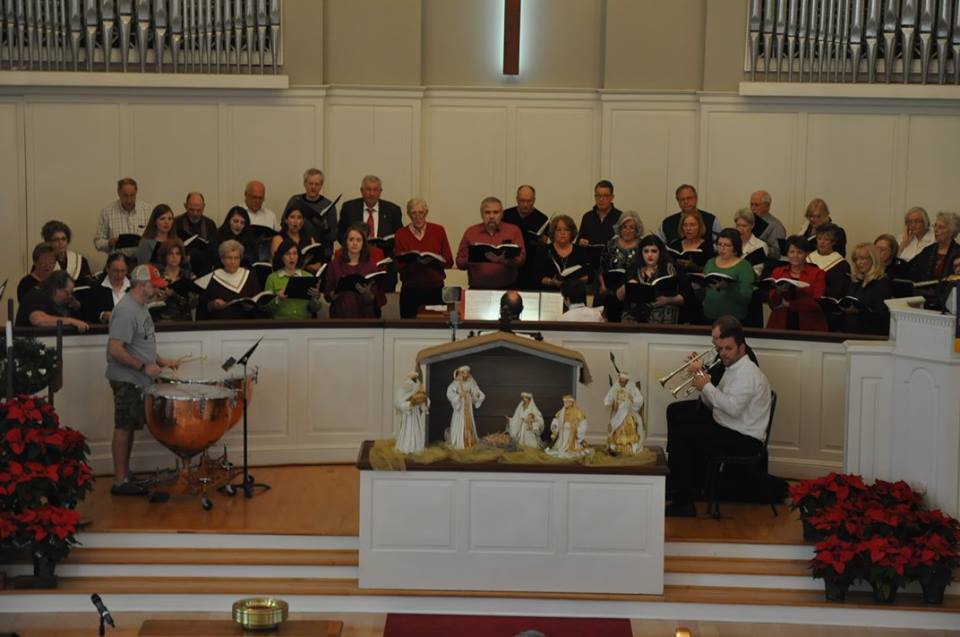 Sometimes I say “yes” to too many things, and regret it later. There was one thing I said “yes” to recently, though, that became a huge blessing in my life.

After hearing about it from my Bishop one Sunday, I decided to join the Mebane Community Choir and sing in its 25th annual performance of the Christmas portion of Handel’s Messiah.

Now, I had never sung this oratorio (or any oratorio) before, and wasn’t familiar with the songs, other than the “Hallelujah Chorus.” Still, I figured I could learn it without much trouble – I could read music after all.

Well, I was in for a rude awakening, because by the end of that first rehearsal I went to (it was the second rehearsal for everyone else), I felt like I would never be able to learn the music. You see, most of the people in the choir already knew the songs because they had sung them for years, so we weren’t learning the songs – we were perfecting them, and working hard on intonation. I was trying desperately to sight-read, and I was completely overwhelmed. 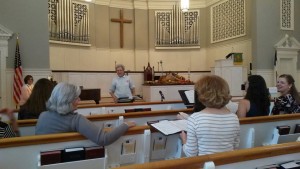 Somebody said something funny – my one moment of relief that week. 🙂

I was so grateful for the woman next to me named Suzanne who was kind enough to explain some things to me. I was able to hear what she was doing and go from there. But, even with her help, I still was so confused, and felt I would never learn the runs. I almost cried on the way home. 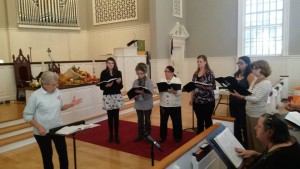 The face of one who was scared and feeling quite inadequate.

The following week, I knew I had to go back at least to return the book, so I decided to give it one more try. I was quite nervous, though, because that was the week we would work with our conductor, Sam, for the first time. 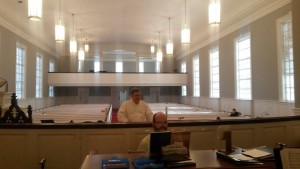 I didn’t know what to expect, but was pleased to find him very personable and funny, as well as an excellent teacher. I felt completely at ease, and learned from him. When I went home that day, even though I still felt quite lost on some songs, I knew I would continue. 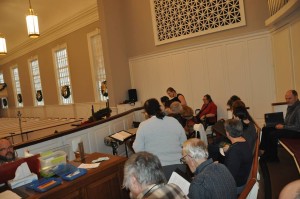 The next rehearsal got a little easier. I kept telling myself each week I would practice at home to get better and better. Well, I didn’t have a lot of time to practice, but my brother, Aaron, gave me some tips on the runs, which helped me quite a bit. I finally got the CD to help me learn my part at the third rehearsal. Did I listen to it? Yes…in the car on the way to dress rehearsal. 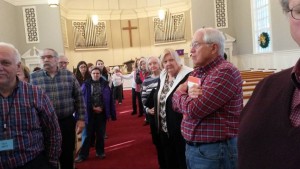 We practiced lining up for the following day.

As every rehearsal came and went, I got less and less overwhelmed. I was starting to fall in love with the songs, and I even felt confident on some of the parts. By the dress rehearsal, I felt that I could do this. I even got teary-eyed as we rehearsed “For unto Us a Child is Born.” My testimony grew that day, and I felt what a blessing it was to be able to sing with this group of individuals and praise the Lord. 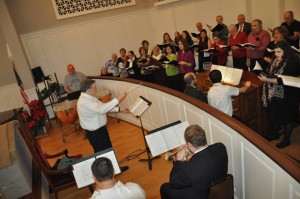 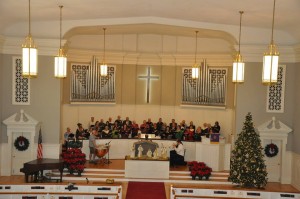 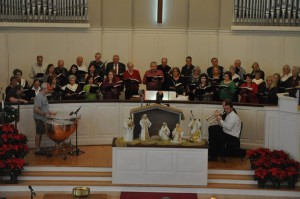 The next day was the concert. I was a little nervous, because I was still only about 85% there on my knowledge of the songs, but I was mostly excited and at peace. I couldn’t wait to take part in this beautiful oratorio. 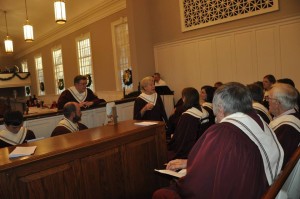 We all wore burgundy robes, which were very hot, but it gave a sense of unity to the group. I felt like a real part of the choir, and even though I am shy around people I don’t know well, I felt that by then, I had formed some friendly acquaintances.

We lined up in our robes in two lines along a narrow hallway downstairs. It was soon time for us to walk up the stairs and down the aisles of people to our seats. I gave a goofy grin to my husband, parents, and Nana as I walked by. I was so grateful they were there.

The performance was wonderful. I hadn’t heard the soloists before then, and they all sounded beautiful. The messages of the songs touched my heart. They made the songs the choir sang all the more meaningful.

When we sang together, we were united. I didn’t get every run correct, but I felt lively, joyful, and confident as I sang. Even the hardest part for me – the amens at the end -were enjoyable to sing, and I felt the audience’s silent amens along with us. Click To Tweet.

When we sat, and it was all over, I felt fulfilled and happy. As I met up with my family, they had smiles on their faces and had nothing but positive comments to share: we blended so well, we sounded like professionals, it was enjoyable even though that isn’t the genre I usually listen to… 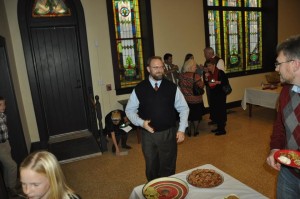 We ate way too many cookies before going home to our normal family dinner and Sunday night. I sang the songs to myself all evening, and into the next day, and it felt amazing.

This experience with Handel’s Messiah was one I will cherish.

I have a testimony that Jesus Christ is the son of God. He was born of a virgin in a stable in Bethlehem. The prophets testified he would come in the flesh, and He did. He truly is the Prince of Peace, for only through following Him can there be peace on earth and in our hearts. I rejoice at His birth, at His perfect life, at His death and resurrection, and at the counsel He offers today. I share this joy with all who will listen, for I know that if we lay our burdens at His feet, He will lighten them and give us rest. Through Him, we have the opportunity to live with our Heavenly Father again, and receive all that He has. Jesus Christ lives, and He will come again. 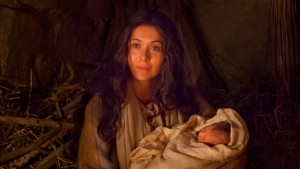