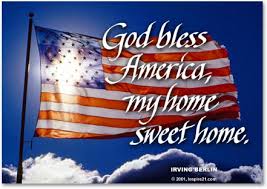 Home sweet home is what America is called in this familiar, beautiful, patriotic song. But, sweet isn’t the word I would use to describe it, at least based on the words and behaviors of many of my fellow Americans.

The majority of what I see on social media, and in the news, involves most or all of those things. Unfortunately, I think most of the people doing it don’t realize the damage they are doing.

Today our new president, Donald J. Trump, was inaugurated. Before and after the election, up until now, I have witnessed alarming amounts of division, fear, and criticism. At times, my feelings have been hurt, but I have chosen not to participate in it.

I personally would not have chosen Donald Trump to be the Republican presidential nominee, and up until the week of election, I didn’t feel comfortable with any of the choices for president. But, I  never publicly called any names, accused friends of different political parties of being racist or stupid, or tried to cause arguments or unrest of any kind.

I do not plan to do that now. But, what I do want to express loud and clear is that contention, pride, anger and fear are not of God. From God comes love, light, harmony and faith. I have seen a few people hold true to those, but too many have gone the other direction. Doubts and disagreements, and expressions of triumph and defeat are acceptable when done in a peaceful, respectable manner – when we strive to understand the other side, when we give the benefit of the doubt, and when we realize that people can change.

Yes, Donald Trump has done some bad things in his past. It is understandable to be concerned, even disgusted. But, we are not his judge. God is. I know that I would be devastated if people judged me solely on my past and never gave me a chance to dictate a brighter future for myself. Or, you may be on the opposite side of the spectrum where you are ecstatic he is president. Expressing your joy is great, but realizing others are hurting at the same time shows compassion. Gloating about it and putting down others’ feelings, on the other hand, shows a disregard for about half of your fellow Americans.

Concerns are valid, but something I have learned in my life is that yelling and complaining in themselves don’t bring change. Looking only to your own opinions doesn’t bring understanding of those with differing opinions either.

My heart-felt advice for what to do now, whether you love our new president or not is this:

I truly believe that for our nation to be great, our citizens must be kind, service-oriented, and driven to action. It takes each and every one of us to spread light to the world.

A friend on Facebook today posted that the Quakers believe that the “Light is in all people and we should look for it in all people, ESPECIALLY those who are different than us.” I believe with all of my heart that even people we dislike, disagree with, or disapprove of, have this light. Sometimes they need help to unlock it in themselves. We have two choices for the next four or more years:

Only one of these choices brings real, long-lasting, positive change. Christ brings light. Let’s be like Him. And what did He do? He forgave, loved, and saw potential in everybody. That is what I choose to do today and always.