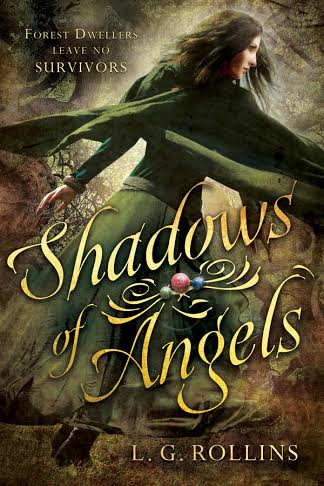 Shadows of Angels is a new YA Fantasy novel by L.G. Rollins. It most definitely holds true to being a fantasy novel  with plenty of legend, transformation, journeys, danger, white and black magic, and great sources of power. I didn’t realize this novel was YA until I was finished, and I will be honest, I would not recommend this book to teens. It was dark, gory, and upsetting almost the entire way through. There was very little rest from danger, fear, battles, blood, and death. There was almost no humor, and only a hint of romance. Honestly, it was almost too dark for me to take. I never had a chance to get a breath of fresh air before being sucked into the darkness again.

That being said, I am sure plenty of people love novels like that. I would have liked it a lot more, though, had there been more respite and romance development.

The beginning of the novel really tugged at my heart. Even though I had just been introduced to Aerbrin and her father, Gavil, I could feel their strong love for each other. I could understand the weight of her father’s sacrifice, and how she must have felt dealing with the aftermath. I was with her as she made the decision to leave home to start a new life that would be safer for her.  Rollins did a wonderful job setting up the rest of the novel just in the first chapter.

By the end of the third chapter, it was clear that Aerbrin’s troubles were only just beginning. There was much more danger and hatred to be encountered. I almost wanted her not to finish her carriage ride to Cuneus, knowing it would bring her pain.

Soon, we get the perspectives of more and more characters, some likable, some not, and some on both extremes. Some we aren’t quite sure how to feel about. Sometimes there were so many characters and so many back stories, it was hard to keep track. It may be helpful to take notes while reading this novel. I am sure it will be worth it, especially since this is only the first novel in a series.

I found myself really falling in love with certain characters, such as Hilfawn, Sir Vita, Timbrick and Teepin. They all were flawed in their own ways, and had their share of tribulation, but they all had a very special part to play in fighting evil and in working to bring the rightful king back to the throne. All of these characters, though so different, are self-sacrificing, brave, have secrets, and are quirky in their own ways.

You won’t laugh or smile much in this novel because the violence, running, worrying, and bleeding is almost nonstop, but you will admire the characters and their constant efforts to do the right thing.

The author was expert at painting a picture of the different beasts and demons encountered, as well as the scenes of destruction. Aerbrin for most of the novel is in a cursed land called the Druiman where a demon called Snugglib commands the elements and the monsters within. Those scenes of Aerbrin fighting for her life are expertly written, as you feel like you are fighting to survive with her.

Similarly, you feel like you are there with Timbrick, Teepin and Hilfawn in their dangerous journey to search for King Sabaderios. The orchal was one of eeriest and most horrible monsters of them all. When encountering her in the book, you will subconsciously hope she doesn’t hear your thoughts or eat at your mind.

The power of the Zaad stones was quite intriguing, as well as the way in which one can access its power. In this first book, the black magic usually won, but thankfully, there were powerful, and sometimes sad moments when good prevailed.

I do think sometimes the explanations of legends, monsters, etc., were a little too complicated, just as there were too many characters in the book and too much violence.  There were also many spelling errors in the book, and some of the vocal expressions sounded too modern.

The book ended in such a way to excite you to find out what happens next. There were definitely enough twists and turns to leave you thirsting for knowledge, such as possible double identities.

For the most part, it made sense for holes not to be filled in, but I was wondering why it took so long for Tradere to get to the Druiman and what happened to Vita after he set out to help Tradere. Other than that, I was satisfied with the way things were left.

The bottom line is, this book is really well written. You will be afraid, worried, horrified, in pain, mourning, confused, driven, and self-sacrificingly irrational with the rest of the characters. It is just up to you if you like books that dark.

You can purchase Shadows of Angels here.

After the forest dwellers destroy her home and kill her father, Aerbrin sets off on a journey to find the truth about her people, her kingdom, and the mysterious Zaad stone that contains a power she never imagined. Magic and mystery join forces in this intriguing fantasy world. Full of shifting alliances and twists you won’t see coming, it’s a can’t-miss read.

L.G. Rollins grew up in a far off land fighting dragons, stealing talismans, and traveling with dwarfs and elves. She is especially skilled at bribing giants with sweets. Currently, her husband and four kids live in Utah so that is where she spends most of her time. She may, or may not, have a Zaad Stone. To learn more about L. G. Rollins and her books visit LGRollins.com.

Shadows of Angels is L. G. Rollins’ first novel and the beginning of the Zaad Stone trilogy.