When Beauty is a Beast 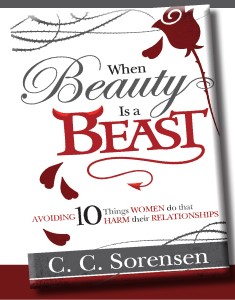 Pretty cool title, huh? Well that isn’t all of it. There is a subtitle: Avoiding 10 Things WOMEN do that HARM their RELATIONSHIPS. Before any of my fellow ladies get angry and annoyed at this seemingly sexist title, and want to ask, “What about the things men do?,” C.C. Sorensen fully acknowledges that in many cases, men definitely can, and do harm their relationships. The reason why he chose to write a book addressing what women do is because it is very rarely talked about by the general public, or counseled on by LDS church leaders. It is something that is very real, but doesn’t get the exposure it needs.

In each chapter, he mentions that men are  sometimes guilty of the abuse in question too, and that it is absolutely inappropriate, but reminds us he is talking about women in this book.

In his conclusion, in speaking of why he wrote the book, he said, “My goal was not to vindicate men or to criticize women. On the contrary, my intent was to heal marriages and families (pg 156). ”

Even though he is speaking to LDS women (or really, any Christian women), I truly got the feeling that he does want to help heal marriages and families through his writing.

That being said, Sorensen is very blunt. If you take offense easily, you may not like this book much. It took me a couple chapters to get used to his candor, but once I did, I really started to contemplate on his words, and ask myself, “Am I guilty of this?”

His advice really held weight because, amongst his words, he included words from experts, words from general authorities, statistics, and most poignantly, stories from men and women he has counseled over the years. Sometimes, the things the women said were like nails on a chalkboard, and some of the things the men said just made me want to cry.

Male abuse is real, and women really can be abusers.

One thing I loved about Sorensen’s book, was that in almost every chapter, he explained how some abusive behaviors could be a result of mental illness or previous abuse. He outlined symptoms, and said that if someone was feeling that way, to go and get some professional help. He also said that in cases of mental illness, the person may not be fully aware or accountable of the abuse.

The book also helped me to learn a little bit about how men and women are different. Sorensen spoke of Gary Chapman’s Five Love Languages, and of how men’s brains are more compartmentalized like waffles, and women’s are more intertwined like spaghetti. Having knowledge of these differences can help the way a wife interprets her husband’s words and deeds, making her less likely to get angry over something he does, most likely unawares, to annoy her.

There were two things about the book I didn’t like:

Overall, the book was really well written. It gave a wealth of insight on ways that women may unknowingly be abusing their husbands, or at least harming them emotionally and mentally on some level. I have some takeaways for myself, as I occasionally do some of the things he spoke about.

If we women are honest with ourselves, we will know the real answer to “Am I guilty of this?” With that honesty and self-reflection, we can be the beauty our husband needs, rather than the beast he fears.

We have no qualms laying out men’s sins—especially abusive behavior. But we’ve avoided “going there” when it comes to women. This book offers advice to heal marriages and families where women display controlling behavior or create fear. It will help turn crumbling relationships into partnerships of love and trust.

C.C. Sorensen is a member of The Church of Jesus Christ of Latter-day Saints, and has served in many positions on both the ward and stake level. “When Beauty Is a Beast” grew out of Sorensen’s many years of counseling husbands and wives who were struggling with various relationship issues.