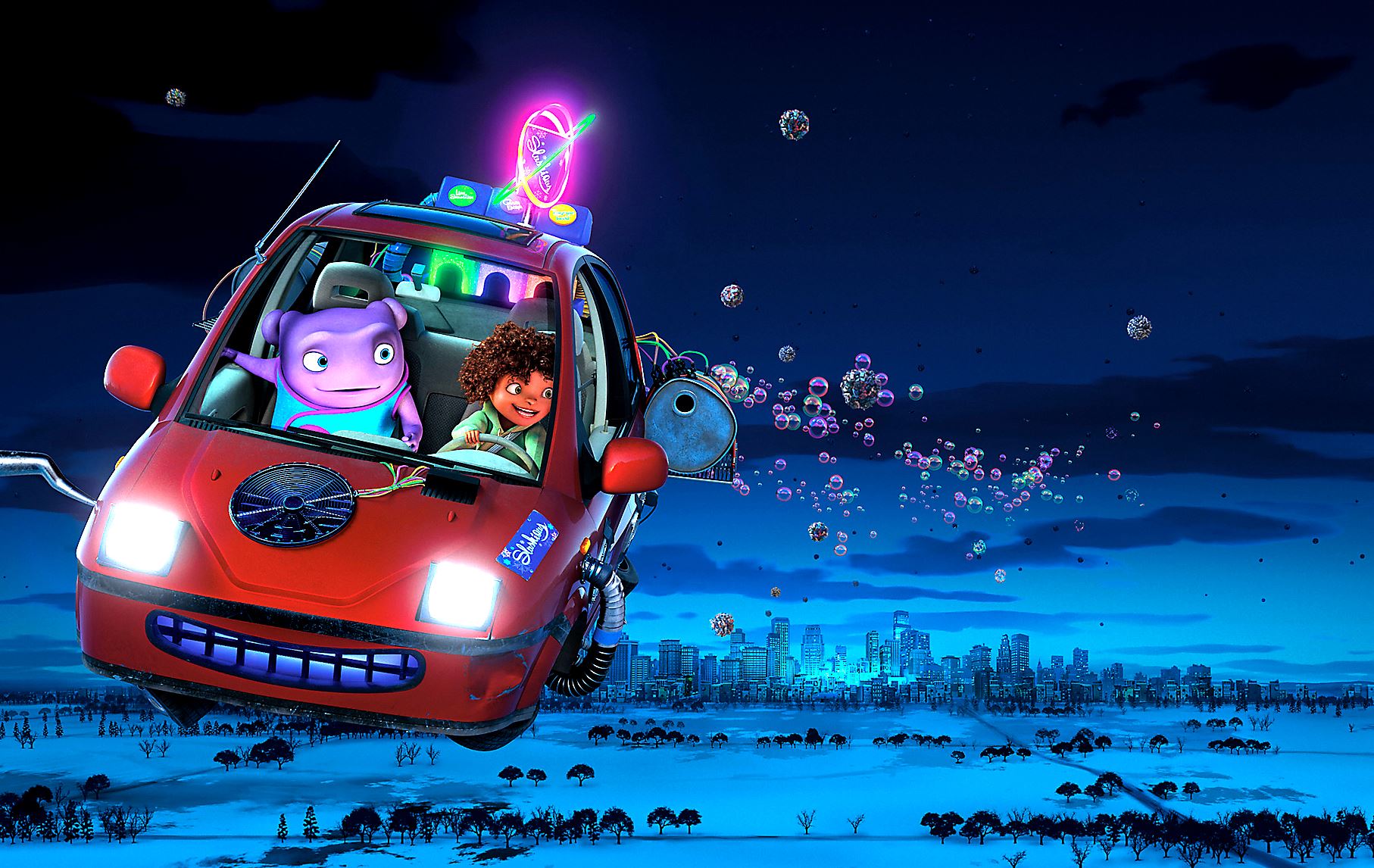 “Your mistakes are what make you human.” – Tip

Dreamworks’ Home is one of my new favorite movies of all time. We saw it twice in the theater and have watched it twice at home since it came out on DVD. Every time I watch it, I laugh and cry at the same points. I truly feel the intensity of the characters’ emotions, and their journey is one I would take with them over and over. This movie is so real because its characters are real, and it helps remind us what it is like to be a human.

The two main characters in the movie are Oh, who is an alien Boov, and Gratuity Tucci (Tip), a teenage girl originally from Barbados. The premise of the movie is that the Boov take over planet Earth, and rename it Smekland, after their captain. They move all humans to a place called Happy Humanstown, and then proceed to live on the rest of the planet, where they will be safe from their enemy, the Gorg. They believe they are doing the humans a favor by taking over their planet, since the Boov are superior and have so much they can teach the simple “humanspersons.” They believe humans love them. Oh is a Boov, but he doesn’t fit in with them. Boov don’t have friends, families, or neighbors. They don’t have parties or have fun, and frown upon uniqueness and wasted time. Oh is like them in the fact that he always runs from danger, but to the Boov, he makes way too many mistakes and doesn’t fit in because he actually desires friends and excitement. Tip, and her cat, Pig, were left behind during the human relocation process. She saw her mother taken from her. She wants nothing more than to find her. She is brave, determined, caring, and fun.

As to not give anything away, let’s just say Tip and Oh meet, and the rest of the movie centers on their journey together to find her mom. Tip does not like Oh at first, and it takes a long time for her to warm up to him. She doesn’t trust him because of what his kind did to her mother and all the other humans.

The formation of their friendship and love for each other is what I love most about the story. What brought them together would bring any two people to a true friendship:

1. Oh tried things that Tip liked, such as jokes, dancing, music, even make up.

2. They listened to each other’s memories, and hardships, especially about family and not fitting in. They realized they had some things in common.

3. They had fun together. At once point, they made fun of Captain Smek. They also did selfies together.

4.  They stopped thinking solely about their own missions, and starting working as a team, helping the other out.

5. Oh tried to put himself in Tip’s shoes, by trying to understand her feelings about her mom.

6. Oh “said the sorry” to Tip about the way his people thought of humans, and for his people taking over Earth. Who would think that a human and an alien could ever be friends? Well, this movie made me a believer that any two living things could form a bond when there is selflessness and compassion.

Another reason I love this movie is because hope is the driving force for success in the journey. Boov were the most cowardly of cowards, and Tip was the epitomy of brave. She would do something even if it had a low probability of success, something the Boov, including Oh, would never do. Her example of courage and hope helped transform Oh into a “Super Boov.”

She also taught Oh to think of others before himself and to stand up to injustice. His transformation was truly moving, and really highlighted the wonderful characteristics humans possess.

We also see highlighted in the movie the irrationality that can come from wanting and loving something so badly. Sometimes it merely causes unkind words and lashing out, and other times it can lead to much worse things.

Another profound lesson is that true knowledge of a people has to come from the source. Assumptions and perceptions can be dead wrong.

My favorite part of the movie is at the end – don’t worry I won’t tell you what happens. This is when Oh has to make a crucial, and incredibly difficult decision. His decision, though the more cowardly one, to me, was actually quite human.

To be human encompasses many inspiring qualities: bravery, determination, love, hopefulness, compassion, and sacrifice. It also can encompass not so noteworthy qualities: selfishness, irrationality, bitterness, anger, and close-mindedness.

In this movie, you will see both, but the qualities that Oh ends up believing are most important, are the ones that make us proud to be “humanspersons.”