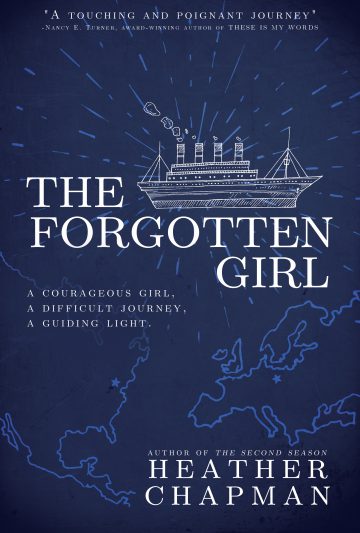 I was excited a month ago when author Heather Chapman contacted me about reading and reviewing her new novel, The Forgotten Girl. I had already read and reviewed two other works of hers: The Second Season  and one of the stories from Unexpected Love: A Marriage of Convenience Anthology I didn’t realize until after I was done reading it, but this novel is inspired by real people – Chapman’s great grandparents. That made it so much more endearing to me.

The story is told from the perspective of Stefania (Stella) Marzewska, a 16-year-old living an impoverished, miserable life in 1906 Poland. Her parents had passed away, and she is living a mostly miserable life of toil, abuse, and no appreciation, with her brother, his wife and their children. Her only rays of sunshine come from her sweet little niece, Bronia, and her best friend, Andrzejek and his brother, Oliwjer, who truly love her.

Despite the love she feels with them, her heart yearns for a change – for freedom, independence, and a fresh start. With the help of her brother, Wiktor, and her best friend, she is able to make the very difficult journey to Baltimore in America.

Stella meets people on her journey whose influence will remain with her forever, though she will never see them again. It brings a great message of how we can change people’s lives by being kind and interested in their well-being.

Life in America is different, and in some ways better. But, it still comes with countless hours of work, undesired changes, fallings out with siblings, men who desire her who confuse her, and friends who leave.

One thing I love about the novel is that Stella, though likable, has a lot of flaws. She is stubborn, distant, sometimes cold, and slow to forgive. On the other hand, she is beautiful but not prideful; she is tender-hearted and loves deeply; she works very hard to earn her living; and most importantly, she never loses hope for the future. She just keeps going even when the wind only seems to blow disappointments and hardship her way.

Stella’s story is one of survival, one of hope, one of self-discovery. When she finally lets herself be vulnerable, she finds the happiness she so desperately longs for.

There are many characters in the book, and all have their own stories of hardship and a search for something better. Some make very poor choices, out of desperation or selfishness, and others understand Stella completely, helping her find herself in this new world.

The Forgotten Girl is a quick read, but so enjoyable. I am glad I read it. I felt that I learned more about my own country, and the people from other nations who have helped bring diversity and richness to it. Read it. You will be moved and inspired.

It is 1906, and sixteen-year-old Stella’s life in Durliosy, Poland, is bleak. Her only hope of surviving is to travel to America, a land of freedom and opportunity, and reunite with her brother in Baltimore. There she’ll find new challenges, and perhaps, if she can put her painful past behind her, a new chance for love and lasting happiness.

Being the youngest of four sisters and one very tolerant older brother, Heather grew up on a steady diet of chocolate, Anne of Green Gables, Audrey Hepburn, Jane Austen, and the other staples of female literature and moviedom. These stories inspired Heather to begin writing at an early age. After meeting and marrying her husband Mark, Heather graduated magna cum laude from Brigham Young University and finally settled down in a small farming community in southeastern Idaho with her husband and four children. In her spare time, Heather enjoys time spent with family, volleyball, piano, the outdoors, and almost anything creative.