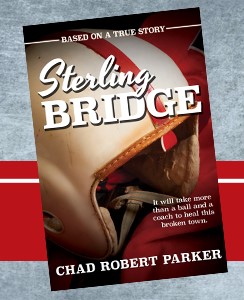 On October 21 of this year, I was pleasantly surprised to receive an email from Chad Parker, the author of a brand new book, called Sterling Bridge.

“I am the author of “Sterling Bridge,” an historical fiction film novel (a short 140 page read) about a little known story of a true Utah hero during the Great Depression. It is being published by Cedar Fort in November. Although I am a first-time author, Cedar Fort tells me they anticipate a great family story like this, for all ages, will have wide appeal.

Your blog caught my attention… and I would like to give you one of the first looks at my book by offering you a free copy in exchange for your honest review. We are looking for some great blogs like yours to feature as part of a blog tour.”

I was honored that he would reach out to me personally to read and review his book.

Tooele, the city that the book takes place in, was a name I heard a couple times when living in Southern Utah, but I had never gone there. Now I wish I had, so I could take in some of its history – the good, the bad, and the ugly.

I was actually quite shocked, even uncomfortable, by the racist ways of the white, LDS population living in Oldtown, Tooele. They ostracized, and were cruel and condescending to the residents (who were mostly European immigrants) of Newtown. They didn’t want the “wops” to go to their schools, attend their dances, or even buy from their stores.

I was pretty upset that boys who beat up other boys would then go to church on Sunday and pass the Sacrament, or adults that were clearly prejudiced towards not only immigrants, but non-Mormons, would be highly respected in the community and at church. It bothered me a lot, and I am sure getting this history out there is a great lesson to our day of how unChrist-like this type of thinking and behavior is.

The narrator of the book, Joe Lacey, lived in Newtown, and was one of one of the teens who was mistreated. In the beginning of the book, Joe’s parents were sending him to his first day of sixth grade in Oldtown, something Joe would have avoided at any cost. He knew he wouldn’t blend in, that his friends wouldn’t understand, and that he wouldn’t be accepted by the Oldtown boys.

Sterling Harris, the hero of this book, was the oncoming football coach at Tooele High School. He saw how Joe was treated by the boys in Oldtown, and he was flabbergasted at how the Newtown kids were kicked out of the Oldtown dance one night.

He took a stand, and integrated the football team with Newtown and Oldtown boys, with the expectation that they would attend school and get good grades. He held each boy to high moral and familial standards.

The school board was not too happy about these changes, but Sterling Harris never gave into pressure, and fought for equity and brotherhood between the people of Newtown and Oldtown as he coached, taught and mentored his football team. There were trials along the way with the boys not always getting along, his job being threatened, and his own family issues, but Sterling held strong to his vision of unity and service. Click To Tweet.

Sterling Harris was a football coach, so football games were a big part of this book. Because I am not a football fan, I admit, I kind of got bored during the game scenes. I couldn’t personally envision them, but I am sure those who are football fans would really enjoy the detail.

It was hard keeping all the characters straight. They kind of blurred together for me, except in the cases when one of the boys did something memorable, whether it was beating up someone, standing up to someone else, or flirting with all the girls

I also was a little confused why Joe was the narrator, because his character wasn’t a huge part of the story after the first few chapters.  Sterling became more of the focus, and Joe became more of an observer than a doer. It came as a surprise to me that he would end up being the star player of the team. I wish that his character had been fleshed out more, but I do understand why the book was from his point of view: he was someone who needed Sterling’s help, and would grow to become his lifelong friend.

Sterling Bridge, though it took place in Utah, was not really a religious book. Sacrament meeting, temple marriage, and callings were brought up occasionally, but it wasn’t the focus, so anyone, religious or not, could read and love this book.

This is the type of story I can see being made into an inspirational football film. Some of the best movies I have ever seen are about a coach who inspired a team to unite and make change in hearts and communities.

Sterling Harris was clearly a bridge builder. I am grateful I got to learn about him through this lovely work of historical fiction.

You can purchase Sterling Bridge here.

Tensions are high in small-town Tooele, Utah, during the Great Depression, but coach Sterling Harris knows football is the answer. With his job on the line, he makes a bold play to find victory for his team and unity for his town. Based on a true story, this inspiring book gives you a fresh perspective on the past and hope for the future.

Chad Robert Parker lived in six states growing up, and is the second of six boys. Each served two-year missions. He is the son of two great, humble parents. They taught him a love for family, church, and life. Chad is an avid sports fan and likes creating games. He also likes juggling; he chose to juggle publishing his first book with getting married and starting a new venture hosting anecdoting.com: a site to share and collect good everyday life stories. Chad works in the library at BYU and lives in beautiful Saratoga Springs, Utah, with his lovely wife.