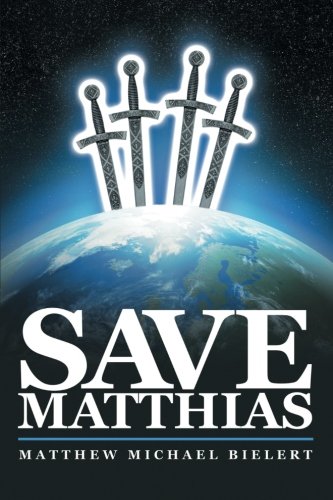 About six weeks ago, Matt Bielert contacted me on Instagram and asked me to review his new novel, Save Matthias. I was excited for the opportunity, and happily agreed. I must apologize to him for not reading and publishing my review before his book release, but better late than never! This book, though lengthy, and covering many years, is unique, interesting, action-packed, tragic, and yet also full of hope. The journeys in the novel were not only physical, but spiritual as well. I was refreshed that the book was not all blood, gore, and death, but also included character development, spiritual awakenings, and relationship ups and downs.

I must admit there are things I did not like much about the novel. It took place in modern times, and years afterwards, but the language in the book was often very old-fashioned. There was also no talk of cars, cell phones, or any other technology. Most of that would have been destroyed in the war, but surely people would have missed them, or tried to develop them anew. Instead, the people seemed really skilled in horseback riding, making their own clothes, and living the simple life. I missed the modern language and priorities. That could have made for an interesting adaptation for the survivors.

If I am being completely honest, I didn’t feel the first part of the book gave a whole lot of value to the plot progression. Perhaps summarization of Vitali’s moving to America, making his fortune, getting married, and having Matthias would have been enough.  Then, the story could have really started building when the world got so wicked the nuclear world war occurred.

I am a person who loves to write, and I was bothered a bit by the frequent use of some words like “okay,” “smirk,” “rode hard,” etc. I felt there was room for more language variety in the novel. I got bored of the same words over and over. Sometimes there were really beautiful descriptive phrases that gave me a breath of fresh air, but I wanted more!

Sometimes the story read choppily, like it was only documenting action and words, and not depicting enough in the form of feelings, reflections, pleasures and pains.  Sometimes we got this from Marcus and Matthias, but most often there were a couple short sentences and then the story moved quickly on to the next action or conversation.

All that being said, this was a good book, and definitely worth reading. Matthias was a very real character. Though more than human in his physical abilities, he was very human in his mental and emotional weaknesses. He was chosen by God to vanquish evil, but he often denied his mission, wished for normalcy, and didn’t want to face the demons that awaited him. He also struggled with hatred and rage. Only when he overcame it, did he reach his glorious potential.

I also loved the character of Marcus. The dreams he had of Matthias prepared him to be his guardian and to teach him all he knew. He was a true mentor and a good man. He too made mistakes, though. He wasn’t always right, and sometimes pulled back from what he knew he should be doing and saying.

I think both of these characters teach us a wonderful lesson to apply to life – no matter your mission in life, no matter your relationship with God, you can and will make mistakes. Nobody is perfect on this earth. But, God will work with imperfect people to achieve His goals.

A lot of the book read like the Book of Mormon, and I loved that aspect of it. The journeys, the record keeping, the battles, lands of righteous people, the courageous warriors – it was all there. When the people of Zion continued to take strangers in and take care of them happily, it reminded me of King Mosiah and how he took in Alma’s people and King Limhi’s people without hesitation.

Matt Bielert is an expert at writing battle sequences. Click To Tweet Matthias was superhuman with the sword, and he used four of them. The fighting strategies, the quick thinking, and the way in which people were killed were all believable (and I am so glad this was a book and not a movie with all that blood, because I doubt I could have stomached it). I could imagine it all happening, and I commend the author on that. My favorite death was that of Sariah and Damien (did I really just say my favorite death?).  It struck a chord with me. Even with their evil and heartless ways, they loved each other. Love is a very interesting phenomenon, and for some reason it was cool to see paired with evil.

Another thing I liked about the novel was even if people passed away, their memories were always held dear, and they continued to watch out for their loved ones. I truly believe that is the case, whether we see them or not. God does not leave us comfortless. He is always with us, and sends others to comfort us too.

The gospel messages in the book were strong, and I know from talking to Matt, that this was his desire. Save Matthias is a book that brings hope and joy when there shouldn’t be any, and courage when most would cower in fear and wish for death. I hope if faced with similar dangers and tragedies, I will be like Matthias, Marcus, and the people of Zion.

About the book: In the early twenty-first century, nuclear war has brought about what many believe is the end of the world. A young man named Matthias Dante must come to terms with the destiny that fate has chosen for him-one that his family is willing to die for. His mother believes he has been chosen to be a warrior of God and a light unto Zion for the last people in the world.

As Matthias and his uncle Marcus travel through what remains of the United States after the great war in search of Zion, the young man begins to learn about the responsibilities that will soon rest on his shoulders. His uncle works to prepare him, but Matthias is overwhelmed by the prospect of his destiny. He doesn’t feel ready to lead others and to face the evil that is to come. Even so, Marcus is determined to save Matthias and keep him on the correct path-one that will bring him to confront the men who caused the war and who intend to slaughter those of Zion. Matthias must fight the dark leader Satorian and do what he can to guide his people to victory-or perish in the attempt.

About the author: MATTHEW MICHAEL BIELERT is an author who is currently working on multiple projects. He is devoted to his religion and family, and he worked for seven years helping at-risk teenagers. He and his wife, Yesenia, have three children and live in Spanish Fork, Utah. This is his first novel.

You can purchase Save Matthias here. You can read more about the book and the author on his website here.