From Baptist Preacher to Mormon Teacher 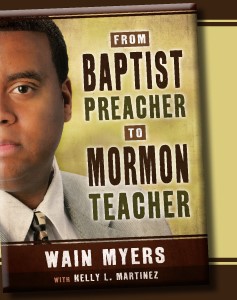 I don’t think I have pulled out a highlighter on purpose with a book since I was in college. Well, that all changed when I got a mere halfway through the first chapter of From Baptist Preacher to Mormon Teacher: I knew that I was going to want to keep a highlighter in my hand the whole time.

Wain Myers’ memoir was powerful from start to finish. Sometimes I would be laughing out loud as I could envision his voice saying and thinking sarcastic things. Then other times I would be wiping tears from my cheeks as he spoke of his difficult childhood, and other struggles he experienced in his life. I not only shed tears of sadness, though; I also shed tears of joy – tears brought from the Spirit. I felt the presence of the Holy Ghost so strongly in this book, and I knew that what Myers was saying was true. His testimony cannot be denied. His honesty enveloped my soul. Click To Tweet

I truly appreciated all the explanations he gave of how the Church of Jesus Christ of Latter-day Saints is organized, and what the beliefs and practices of its members are. Anybody of any faith who reads this book will come away with a lot of knowledge, and hopefully some different perspectives.

Wain Myers is a true Mormon teacher, not just from the callings and positions he has held in the church, but also from fearlessly sharing his story in this book. His testimony is pure, and strong, and even more real because he admits he has struggled. That is what makes his story so much more believable and easy to accept – because his road has been hard, and he has had to rely on his Heavenly Father to guide him back to the straight and narrow path.

He also gave terrific counsel in this book, counsel which any Latter-day Saint, or anyone searching for truth, can safely hold on to. His words were consistent with counsel I have heard from the prophets and apostles of the church, and that brought peace to my heart.

I truly loved this book, and will cherish it forever. I was kind of frustrated, though, about how the missionaries in his stories quoted a scripture from the Book of Mormon when answering questions about why there was a priesthood ban for African Americans for much of the church’s history. The scripture wasn’t relevant, and didn’t answer the question. Unfortunately, there is no real answer, because we just don’t know exactly why Brigham Young instituted the ban. There have been theories, but no doctrinal reason. All we know is that Young promised that at some future day, black Church members would “have [all] the privilege and more” enjoyed by other members.” We also know that there was no revelation given to lift the ban until Spencer W. Kimball was Prophet. There are so many questions and so many holes with this, but I think Wain Myers almost unknowingly gave some peace to the situation when he said:

Myers’ feelings about the priesthood ban are very tender, and that he still struggles with it today. No matter what the full explanation, I truly believe that someday we will understand. The Lord will reveal everything to us someday, as long as we keep the faith, as Brother Myers has done so well.

I whole-heartedly recommend that everyone read From Baptist Preacher to Mormon Teacher. For me, it brought a greater understanding of how other churches work, and helped reaffirm for me that God speaks to and has a divine plan for each and every one of us. His plan for Myers was clear as he shared his story. What will you get from this memoir?

Wain Myers thought he knew what he believed, but after a revelation from God, something had to change. This former Baptist preacher tells his fascinating story of following the Spirit’s voice and ultimately becoming a convert in the LDS church. This remarkable true story will inspire you to follow your own promptings and share truth wherever you find it.

Wain Myers is a native of Dayton, Ohio. He served in the United States Army in Bad Kissingen, Germany, where he received his call to the ministry. After his military career, he returned to the U.S. and began preaching at True Vine Missionary Baptist church, where he preached for over five years and was then introduced to The Church of Jesus Christ of Latter-day Saints by his lovely wife Sebrina. He’s been an active member of the Church since 1995 and has served on his stake’s high council and as second counselor in the Genesis Group leadership.

Wain and Sebrina are the proud parents of seven amazing children; Le’Roy Jr., Isaiah (who recently returned from a full-time mission in the Louisiana Baton Rouge Mission), Bradford (and wife Paige), Quesley, Braxton, Spencer, and Ammon. Wain is a firm believer that no amount of success outside of the home can make up for failure inside the home. Check out his website at authorwainmyers.com.

Kelly L. Martinez has written about sports and entertainment for most of his professional career, though he has also dabbled in travel and tech articles. His writing has appeared in several national and regional publications, such as USA Today, the Los Angeles Times, Meridian Magazine, and the Deseret News. He comes from a long line of Mormon pioneers on his mother’s side and is of Hispanic, French, and Native American descent on his father’s. This is his first co-authorship and published book.