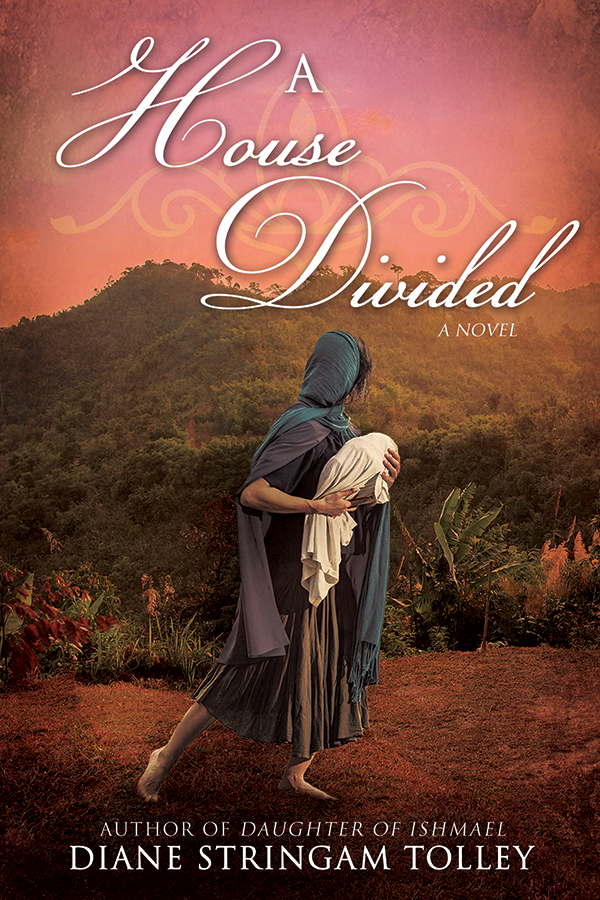 A little over a year ago, I had the privilege of reading Diane Stringam Tolley’s novel, Daughter of Ishmael. I absolutely loved how she used the early stories of Lehi, his family, and the family of Ishmael, to create a beautiful story surrounding a young lady she named Hannah, one of the daughters of Ishmael. Through this novel, the idea opened up to me that the separation of Lehi’s family into righteousness and wickedness may not have been as straightforward as it seemed.

From the last novel, we learn that Hannah, though married to Lemuel, who ultimately chose wickedness, always believed in the words of Lehi and Nephi. At the end of Daughter of Ishmael, she found herself being stoned to death by those who  called her family, even her own teenage son, Samuel.

At the beginning of A House Divided, we pick up where we left off, where Hannah, left for dead, miraculously survived her stoning. While reading, my heart ached for her, and I could feel her physical and spiritual pain as she immensely struggled to press forward and journey towards Nephi and his people. The hope that God put inside of her was truly touching, and helped her make that journey despite her immense pain.

Hannah was truly blessed by the Lord in so many ways as she remained faithful and obedient. The first chapters of the novel as she journeyed by faith to Nephi’s camp were my favorite. She had rescued a new friend who would be a protector to her and those she loved for many years to come; she came face to face with others from Laman’s camp – some who would have changed hearts, and some who would have tragic ends to their lives; and she endured much danger, from Laman’s men, to ferocious creatures, to natural disasters.

Finally, she, her furry companion, and Tabitha from Laman’s camp, made it to safety with Nephi and his people, their people.

But if only their struggles ended there. No, there would be much heartache due to deaths of loved ones, both Nephites and Lamanites. You see, though their houses were divided, they were still family. They were still connected. Many in Nephi’s camp mourned for their children and siblings in the Lamanite camp.

Nephi was a strong leader, a true prophet of God for the Nephites. Tolley added scriptural occurrences to the novel, such as the growing industry of the Nephites, the building of the temple, Nephi writing on golden plates, and Jacob assuming a role of spiritual leader as well, teaching them of Christ and a higher law He would bring. See 2 Nephi Chapter 5 (and onward, if you want to read Jacob’s teachings, for more information.

And then, Tolley uses one little verse at the end of chapter 5 to make the second half or her novel:

And it sufficeth me to say that forty years had passed away, and we had already had wars and contentions with our brethren.

At first, the conflicts between the Nephites and Lamanites, leading to their war towards the end of the novel bothered me because there were no scriptural accounts to that affect. But, when I found that verse, I felt better. Obviously most of the novel is fiction, but it gave me comfort knowing that the bones of it resembled the actual history.

There were a few chapters in the novel that I found boring, but once the Lamanites started to cause harm and problems to the people, things got more interesting again (that sounds horrible, I know). The reason I say that is because, once again, you start to feel the fear, anxiety, desperation, and then courage of the people. New characters and old made appearances, and there was much heartache due to the Lamanite actions.

The war between the Nephites and Lamanites in the novel perhaps brought the sweetest, and also saddest part of the novel, at least for dear Hannah. I won’t tell you what it is – just trust me. It has to do with those Hannah holds dear.

I must be honest, and say that there were some things I didn’t like about the novel:

That being said, it was overall, an amazing novel, and a perfect sequel to Daughter of Ishmael. Just as the first book, this novel really makes you think about the complexity of a family separating, and the heartache, and simultaneous fear and hope that go along with it. I will truly never read the accounts of the early generations of the Nephites and Lamanites the same way again. Thank you for that, Diane Stringam Tolley.

Hannah has made her decision. Now an outcast from her own people, injured and weak, she must make the trek alone to find her prophet and those who have followed him. But miles of wilderness separate them. Does she have the strength to continue? And even if she succeeds, will she and others who share her faith survive the inevitable war between brothers?

Raised on a ranch on the great Canadian prairies, where normal life included–but was not limited to–a loaded civil war cannon used as acounterweight on the garage door, and at least one headless chicken, Diane Stringam Tolley has been penning stories since Mrs. Hainsworth’s grade six class. Her working life as a journalist was spent writing other peoples articles and stories. Now, in retirement, she writes  her own. A House Divided is her 11th novel.