May 29, 2015, we realized that Kamren could climb into his crib. We were excited and nervous at the same time. We were proud too, of how high he could hoist his leg up. Gymnast material right there: 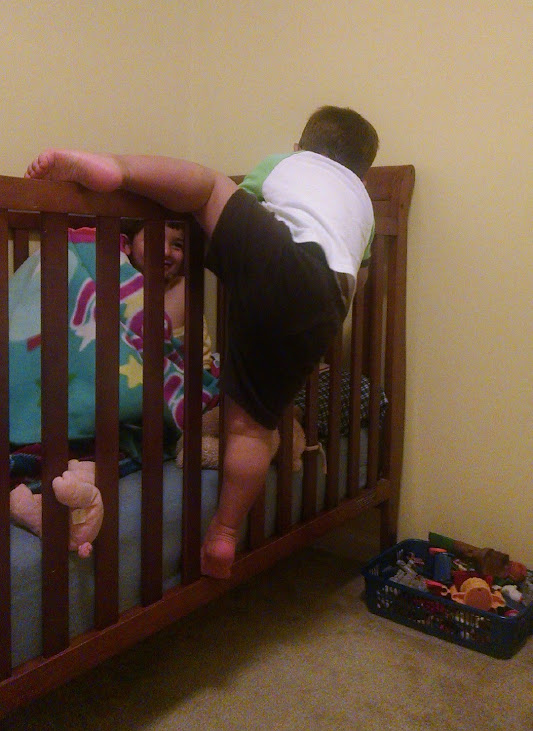 We knew pretty soon he was going to be climbing out too. One Saturday afternoon, on June 6, I put Kam down for his afternoon nap like normal. A few minutes later, I heard some pig noises coming from his room. It sounded like his Discovery Animal Farm Book. I thought to myself, “I didn’t put that in his crib.”

I opened the door, and there he was on the floor reading his book. I gave him a kiss and put him back to bed.

I was pretty sure he had climbed out of his crib for the first time, but just in case, I stupidly asked Jad if he had taken Kamren out of his crib. He looked at me like I was dumb, and said “no.” Then I confirmed our little son could indeed climb out of his crib.

We decided it was time to turn his crib into a toddler bed. That night, Jad made it happen. 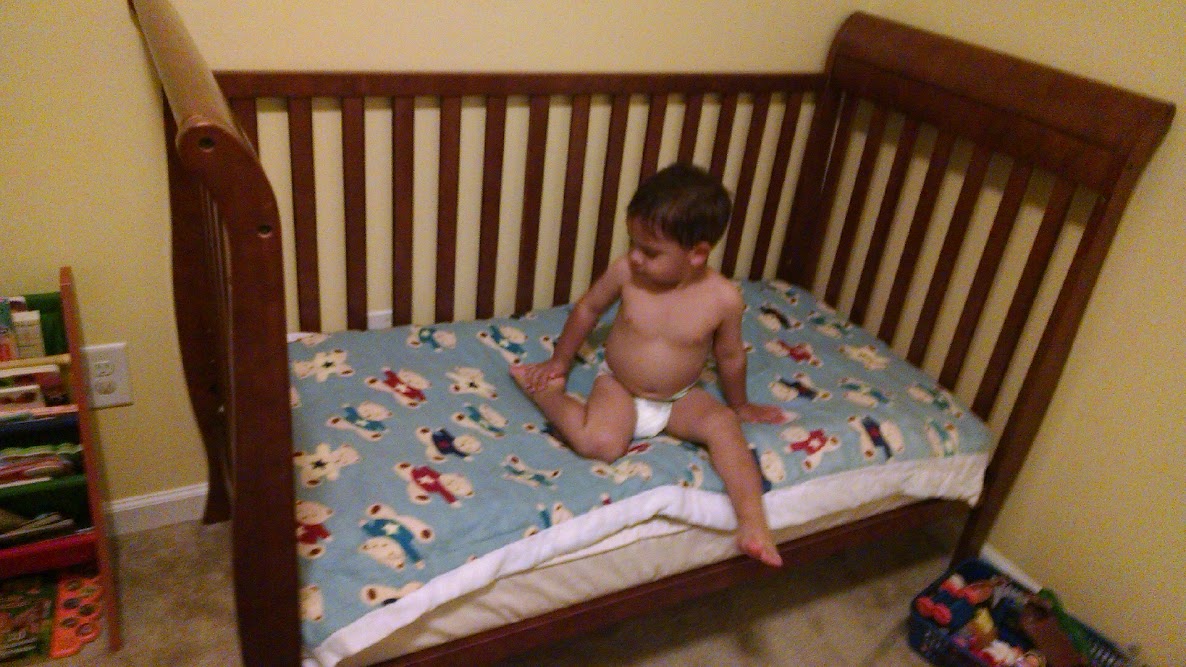 His crib mattress was pretty hard, so we had kept layers of blankets under his sheet to make it more comfortable. When Jad removed the sheet, Kamren saw this blanket, and wanted it on his “new” bed. He tossed all the others aside, and would not allow us to put a sheet back on. 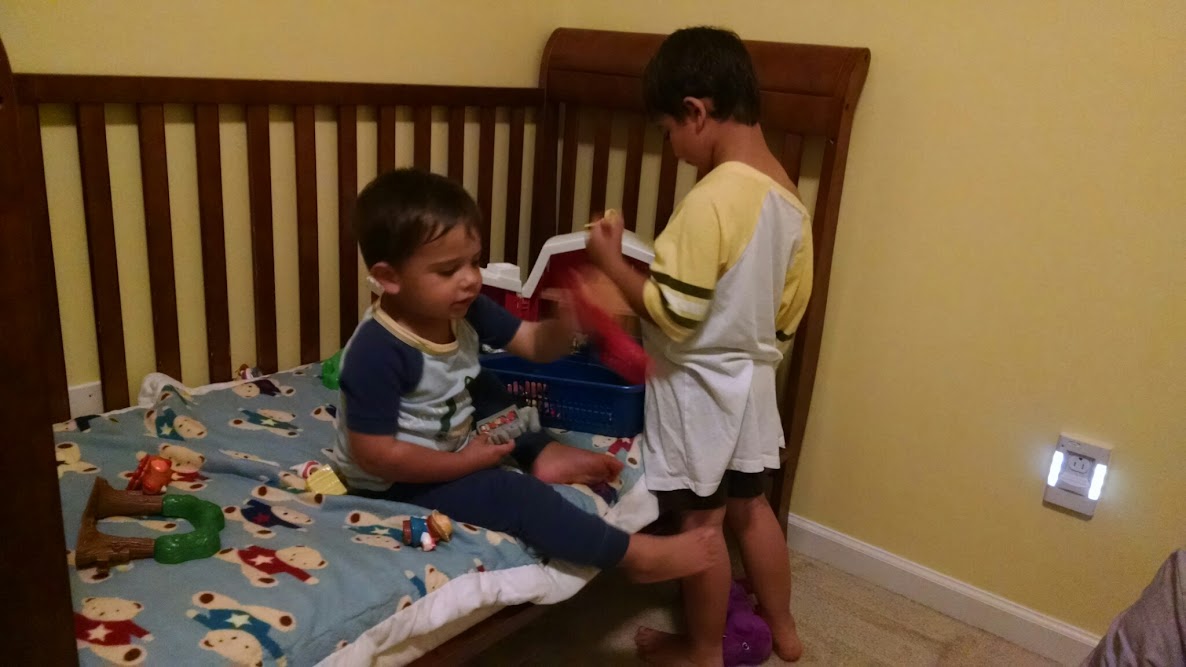 Rigel was just as excited about Kamren’s bed as he was. In fact, he wanted Kamren’s bed, and wanted Kam to move into his room. We tried to remind Rigel of his super cool bunk bed.

Kamren didn’ t give us too much trouble that first night. I remember when Rigel was first in a bed, he would get out of bed so many times, we would go crazy. Kamren was easier. I was worried all that first night about him falling out of his bed, so I checked on him probably three times.

This is how he looked the next morning – oh my goodness, so adorable! 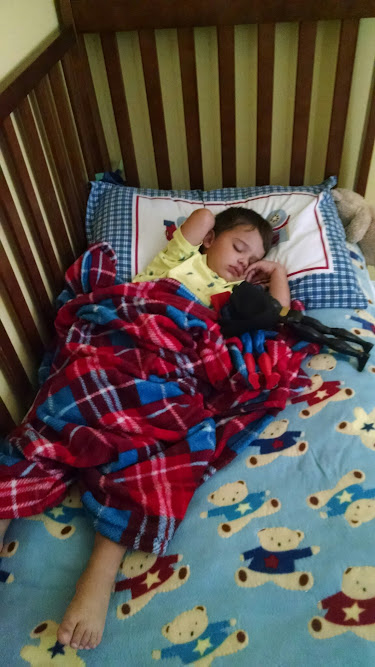 The second morning was even more thrilling for me, because Kamren got up all by himself. He had a book in his hand. I about melted. 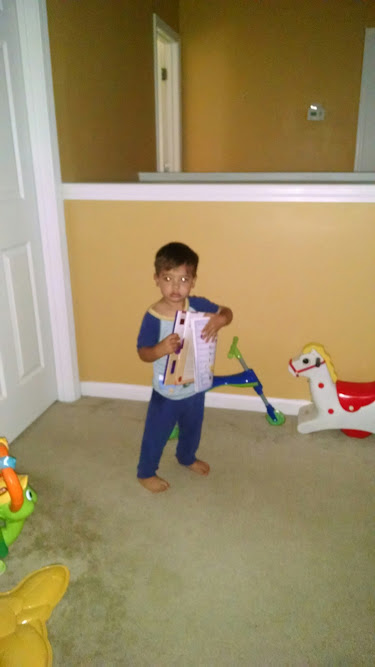 Unfortunately, I had found Kamren sleeping with his head under the bed that night. I told Jad we needed to put a rail on. So, that day, we found an old one in the attic, and made it work. The littles were so excited. 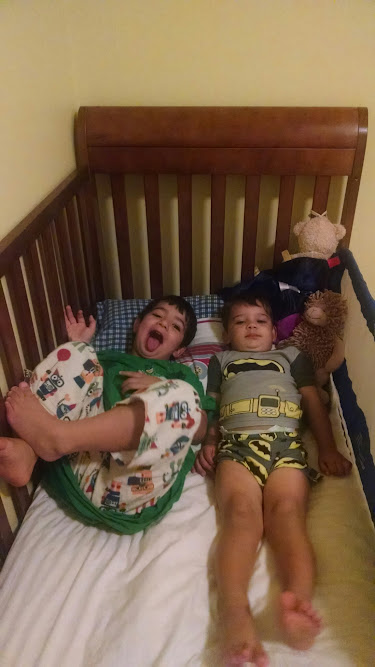 Kamren has mostly done really well in his toddler bed. One afternoon, we couldn’t find him, and I found him in his bed, lying down with a blanket. I think he likes that he can lie down whenever he wants. Sometimes he still takes advantage of the fact that he can get out. He will do it sometimes. Overall, though, he will take his nap when it is time for nap. At night, he will go to bed as long as his tummy is full, and he feels like he has had enough bonding time (books, singing, cuddling).

We love how our little boy is growing up, but it also makes us sad. He really isn’t a baby anymore. He changes every day. How we love our sweet Kamren!