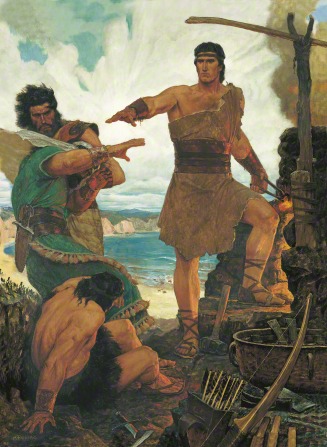 Alone I stand,
While all the world around me
Surrounds me
And takes me for a fool.
But I am not
The first to be regarded
As weak and simple-hearted
For choosing to believe
That He keeps watch over His own.

And so it is
My heart has been befriended,
Defended
By those who’ve gone before.
Who call to me
Like distant rolling thunder,
“You cannot be outnumbered!
You’re standing with the Lord.”
And He keeps watch over His own.

I stand with Nephi and Moroni,
With Abinadi, who testified in flames!
With saints through the ages,
Stalwart and faithful,
Leading me, telling me . . .

This beautiful song is called “I Never Stand Alone,” and is from the musical From Cumorah’s Hill. It has been on my mind for the last couple days. You may remember I recently wrote about another song from this very musical. I may at some point write about all of them, for they all are glorious.

This particular song, which cannot be done justice simply by reading the words, is one I have loved since I was a teenager studying the Book of Mormon. I sang this song in front of a large group of youth twice in that year, and it had a huge impact on my testimony of the gospel of Jesus Christ, and of the Book of Mormon.

I love how the words of this song bring comfort and strength to true believers in Christ, who many times are persecuted and belittled for their beliefs. Living the gospel in word and deed will never be popular in this world, but, as the song says, when I stand with God, I am never outnumbered, and I am never alone.

There is another message in this song too. It mentions standing with the prophets. Prophets have been testifying of Christ long before He was ever born. They testified of Him after His resurrection, and there are still prophets today who testify of Him, and provide counsel on how to live in accordance with God’s will.

Though prophets are called of God to bring souls unto Him, they are often shunned, persecuted, and sometimes even killed. The end of this song praises the names of men named Nephi, Moroni and Abinadi.

These are three prophets in the Book of Mormon who remained unshaken in their faith no matter what hardships they faced.

Nephi was the son of Lehi, who received a vision from the Lord in 600 B.C. to leave Jerusalem. His life was being threatened by wicked men, and the city was soon to be destroyed due to the wickedness of the people. Nephi prayed for confirmation any time his father received instruction from the Lord, and he obeyed faithfully.

He was the youngest of four brothers. One of his brothers, Sam, stood by him always, but his oldest brothers, Laman and Lemuel, constantly murmured and complained. They did not believe that their father was a prophet. They hated their younger brother for his righteousness, his faith, and for his relationship with God.

Early on in their journey in the wilderness, Lehi, on commandment from the Lord, asked his sons to go back to Jerusalem to get the Plates of Brass. A wicked man named Laban was in possession of these plates. This was a very dangerous endeavor. Nephi, however, never complained, and even attempted, without hesitation, to get the plates on three different occasions. He relied on the Lord to deliver him from Laban, and because of his faith, he was able to obtain the record.

Many times Laman and Lemuel tried to kill Nephi, one instance being after they lost their earthly wealth the second time they tried to get the plates. But no matter what his brothers said or did in hatred and bitterness, Nephi was always courageous. He always obeyed the Lord. He always forgave his brothers and bade them follow the Lord too, regardless of their many unrighteous acts.

When I think that I can’t do something, I think of Nephi’s words:

“I will go and do the things which the Lord hath commanded, for I know that the Lord giveth no commandments unto the children of men, save he shall prepare a way for them that they may accomplish the thing which he commandeth them” (1 Nephi 3:7).

About 440 years after Lehi led his family out of Jerusalem, a man named Abinadi was called to be a prophet and preach repentance to a wicked people, called the Nephites, and their wicked king, Noah. He went among the people warning them that if they did not repent, the Lord would allow their enemies to bring them into bondage. The people were angry and tried to take his life, but the Lord delivered him out of their hands.

Even after that near-death experience, Abinadi willingly returned to the wicked people two years later to cry repentance again, this time prophesying the death of their king and the destruction of the people if they did not repent. He was arrested and soon thereafter taken before King Noah.

King Noah was angry with Abinadi’s bold declarations regarding the wickedness of the king’s priests and their false teachings, and commanded that he be slain.

Abinadi then shone with the power of God and commanded the guards, “Touch me not, for God shall smite you if ye lay your hands upon me, for I have not delivered the message which the Lord sent me to deliver. … I must fulfil the commandments wherewith God has commanded me” (Mosiah 13:3).

He had the Spirit of the Lord with him as he finished the message he was sent to deliver. Abinadi said that once he gave this message, it did not matter what would happen to him.

At the conclusion of his testimony where he prophesied of the coming of Jesus Christ, King Noah demanded that Abinadi be put to death. A young man, named Alma, one of the king’s priests, pleaded for his life. This man named Alma would become a worthy vessel to forward the work of the Lord among the people.

Three days after Alma spoke up and was cast out, King Noah demanded that Abinadi take back his words or be put to death. He refused.

Abinadi suffered death by fire, being put to death because “he would not deny the commandments of God, having sealed the truth of his words by his death” (Mosiah 17:20).

I believe that any prophet of God that ever lived would have been willing to give his life to accomplish the will of God in proclaiming the truth. Joseph Smith was one of those prophets.

Do I have the courage to do what Abinadi did? I am not a prophet, but I am a disciple of Christ. I know that I want to do God’s will, and that I should not be afraid to do so. There is no worldly punishment that could stop me from following my Savior.

Moroni was the last prophet in the Book of Mormon. About 400 years after Christ’s resurrection and visit to the Americas, Moroni’s people, the Nephites, were being obliterated from off the face of the earth. He saw his father, Mormon, die in battle. That left him the last righteous Nephite, and person, in the land.

His life was in much danger because the Lamanites put to death any Nephite who would not deny the Christ. Moroni said, “And I, Moroni, will not deny the Christ; wherefore, I wander whithersoever I can for the safety of mine own life” (Moroni 1:3).

As Moroni hid from the carnage going on amongst the Nephites and Lamanites, he wrote his testimony in hopes that it would someday help the descendants of the Lamanites.

What a Christ-like person he must have been to write to help the souls of his enemies. Moroni wrote so many beautiful words about how the church of Christ should be operated, how to treat others as God would want us to, how to gain charity, which is the pure love of Christ, how to discern good from evil, and how we all have gifts given to us from God.

The most life-changing message that Moroni left for all of us, is this:

“Behold, I would exhort you that when ye shall read these things, if it be wisdom in God that ye should read them, that ye would remember how merciful the Lord hath been unto the children of men, from the creation of Adam even down until the time that ye shall receive these things, and ponder it in your hearts.

And when ye shall receive these things, I would exhort you that ye would ask God, the Eternal Father, in the name of Christ, if these things are not true; and if ye shall ask with a sincere heart, with real intent, having faith in Christ, he will manifest the truth of it unto you, by the power of the Holy Ghost.

These are just three examples of prophets in the Book of Mormon who were courageous, stalwart, faithful, and obedient. Though often they stood without human allies, they were never alone because they stood with God.

I know that as we follow the examples of these worthy men, and valiantly do God’s will, that we will be blessed, that we can endure all things that come our way. Heavenly Father and Jesus Christ love us more than we could ever fathom, and they are right there beside us. Keep the faith, my friends.