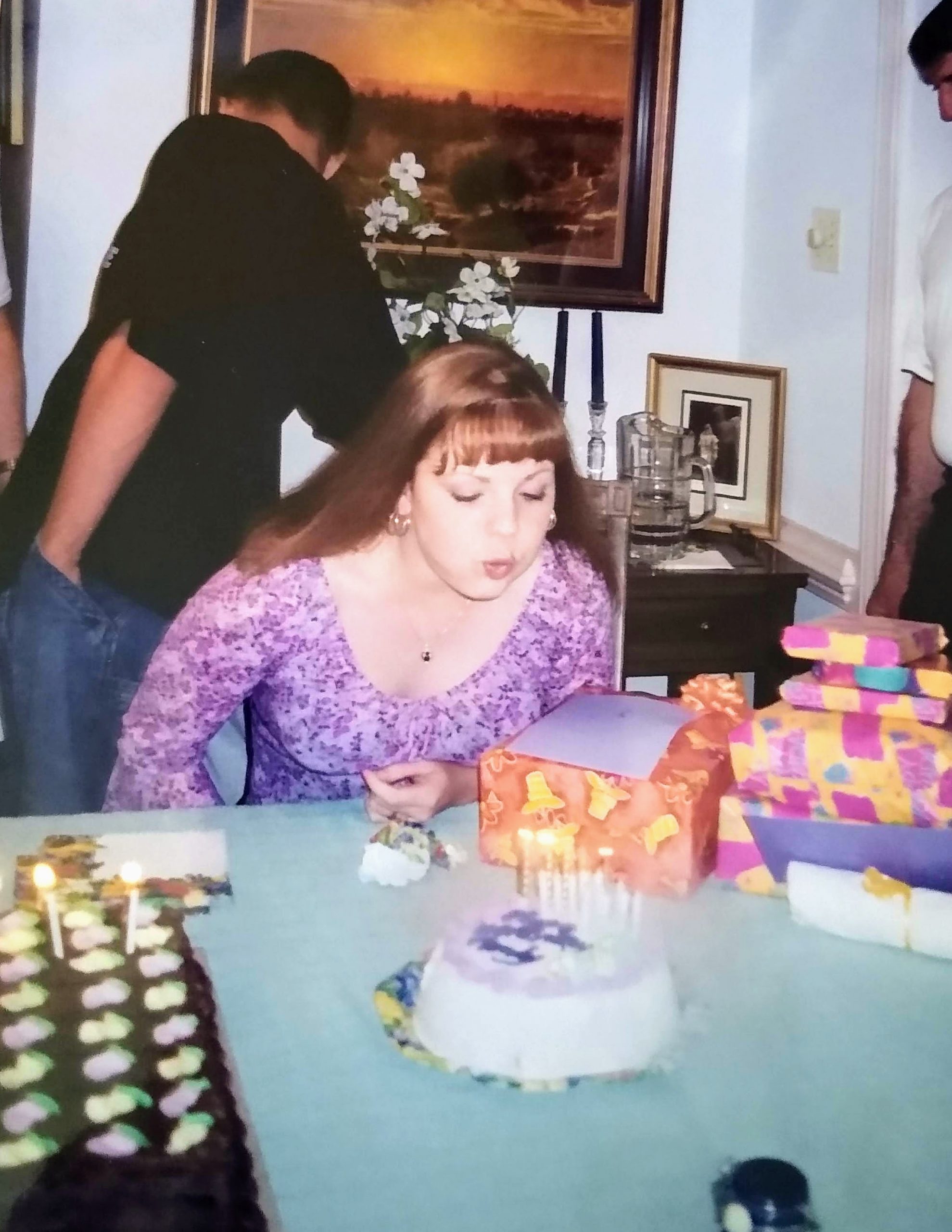 I realized today, my 36th birthday, that it has been 18 years since I turned 18! Crazy!

And then I thought just how much my life as changed – how much I have changed – as a result of what has happened in my life the last 18 years.

I still remember my 18th birthday a little bit. It was at Nana’s house, just like most of my birthdays were, since my Granddad’s was one day after mine and my uncle’s was one day before mine. It was always very special.

At age 18, I had just graduated from high school. What kind of a person was I then? Well, I was a good person who did well in school who made relatively good choices and who befriended anyone who needed a friend. I went to church every Sunday. I was also obsessed with theater and musicals. I did not have the best self confidence due to being made fun of for so long for my pale skin and freckles. I also never had a lot of close friends my age in high school largely due to my values.

I was excited to go to college that January, but would work for six months to help me raise money. I was going to go to Southern Utah University in Cedar City and I was excited to get away and do my own thing.

So what happened the next 18 years? Allow me to highlight some of the biggest things from each year:

2002 – Graduated high school, worked two jobs (CVS and Walmart), and began going to the Singles Ward, where I met my first “love,” and thought I didn’t want children

2005 – Had my first baby, Casey Scott Lewis, and filed for divorce

2006 – Was greatly saddened by the deaths of my beloved Granddad and my two great grandmothers, got a divorce, graduated from SUU, moved to North Carolina for the first time, tried to fit in with singles again and had the worst self-esteem ever (see some of my struggles through being single from 2006-2010 here: https://ablisscomplete.com/finding-joy-in-my-circumstances/ )

2007 – Got a full time job at the AICPA, moved into my own apartment with Casey, put him in daycare (super hard for me), dated here and there

2008 – Fell madly in love with a man who loved me back but kept trying to get me to leave my church, met and fell for a Marine who would soon be deployed

2009 – Met Jad, decided between him and my marine (guess who won?), and made wonderful memories with this man I was falling in love with and felt was the one for me

2010 – Got engaged and then married to my true love, Jad, went on a belated honeymoon to Pigeon Forge, got pregnant with Rigel

2011 – Rigel was born, quit my successful career at the AICPA so I could raise him, started an Avon business, got sealed in the temple to Rigel and Jad, and Jad had major surgery to remove most of his liver due to having Echinococcus

2012 – Moved into our first home in Mebane, NC, got pregnant with Kamren

2013 – Kamren was born at home in the toilet – the scariest, yet most miraculous event in my life other than Jad’s surgery two years before, started teaching an Institute class on the Book of Mormon, Jad became a citizen of the United States, I performed in a musical with my church called Sing Down the Moon: Appalachian Wonder Tales

2014 – I started this blog, which I felt was a calling from the Lord! (See a summary of my blogs from that year here: https://ablisscomplete.com/a-blissful-anniversary/ ), we got a dog, celebrated my 30th birthday in DC, and Jad started IT school, which kept him very busy

2015 – Quit my Avon business, later started an It Works business, started doing book reviews for Cedar Fort Publishing and writing articles for Family Share, started singing in Messiah in Mebane (Just in case you want to know all about that year: https://ablisscomplete.com/2015-with-the-al-bjalys/ )

2016 – Won a trip to Disney world, went to Disney World for almost a week, got pregnant with my fourth, performed in my church’s musical Chitty Chitty Bang Bang, quit It Works, helped edit an author’s book for the first time (I would do so a few more times in the coming years, and I hope to do this as a job someday), found out I was having my first girl, attended the open house of the Philadelphia, PA temple, had my daughter, Eve, 5 weeks early

2018 – Attended an elite training to help me scale our business, spent most of my time that year on my business, coached the next set of trainees at the same conference I went to earlier that year, started working with amazing women in the stake primary presidency (my first time working in the stake – district of smaller wards or congregations)

2019 -Performed in my church’s musical of Seussical, went to Palmyra, NY and got to see all the sacred sites of our early church history

2020 – Closed down PB and Apple Jelly, went on a wonderful 10 year anniversary trip with Jad to Asheville, NC, felt inspired to post Book of Mormon quotes on Facebook often, am still enduring Covid-19 and learning how to better stand up for the needs and rights of all my brothers and sisters in this world, and also working very hard to get our house ready to sell and build a new home on over 5 acres

I am sure I am missing a bunch of things, but these are important to how I have changed and developed as a person over this time.

From my experiences, I have:

There are countless ways that I have learned and grown through these 18 years. I see God’s hand in refining me, and I pray in the next 18 years I will be closer to my true potential.